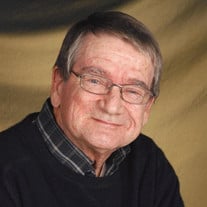 William &#8220;Bill&#8221; Botten was born on April 10, 1942 to Almer and Vernette (Jahn) Botten at the Montevideo Hospital. He attended grade school though 8th grade at St. Joseph&#8217;s Catholic School and graduated from the Montevideo High... View Obituary & Service Information

The family of William "Bill" Botten created this Life Tributes page to make it easy to share your memories.

Send flowers to the Botten family.