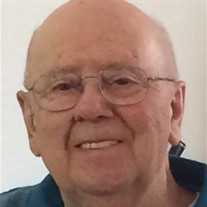 Wilfrid (Willie) Roderick Roi, was born January 30, 1926 at Louisville Township, in Red Lake County Minnesota. He was the youngest of three sons of Homer and Leonora (Huot) Roi. He passed away peacefully on June 14, 2018 at 92 years young in the Granite Falls Care Center. Willie was baptized and confirmed in the Catholic faith. He attended country school through the 8th grade and Northwest Agricultural School in Crookston, MN. During his first year he contracted rheumatic fever and never returned. He obtained his GED years later. Willie was united in marriage to Dorothy Mireault in Dorothy, MN, at St. Dorothy’s Catholic Church on September 13th, 1949. They celebrated their 68th anniversary in 2017. From this union five children were born. Willie worked in East Grand Forks a few years before moving to Seattle, WA in 1952 where he worked at Boeing. Nine months later they moved back to East Grand Forks and he started working for NSP. In 1972 NSP transferred him to Granite Falls, MN. After 34 years he happily retired in 1988 and they enjoyed many years of traveling in their camper, wintering in AZ, and flying around the country. Willie loved the outdoors. He was a frequent visitor of the goose blinds in Lac qui Parle, the fishing boats on Lake of the Woods and the “deer stands” in Crookston MN. Don’t forget the salmon and halibut in the Gulf of Alaska and the moose of northern Minnesota. He is survived by his wife Dorothy, son Daniel (Barb) of Rosemount MN, daughter Diane (Dan) Picht of Granite Falls, and daughter Donna (Dan) Knutson of Eagan, MN; Five grandchildren “Our Angels” Jason Roi, Laura (Neil) Smith, Julie (Matt) Seely, Cody (Samantha) Knutson and Jesse Knutson; and one great-grandson, Avery Smith. He was preceded in death by his infant twin sons, Dennis and Joseph; parents Homer & Leonore, brothers Leo and Louie.

Wilfrid (Willie) Roderick Roi, was born January 30, 1926 at Louisville Township, in Red Lake County Minnesota. He was the youngest of three sons of Homer and Leonora (Huot) Roi. He passed away peacefully on June 14, 2018 at 92 years young in... View Obituary & Service Information

The family of Wilfrid Roi created this Life Tributes page to make it easy to share your memories.

Send flowers to the Roi family.