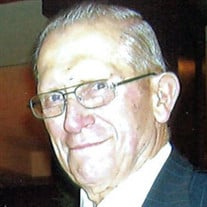 Graveside services will be held on Wednesday, June 10th at 2 pm at the Immanuel Lutheran Cemetery. A private family service will be held prior and will be live streamed on the local Clara City channel and the church facebook page. Wendel George Pieper was born July 23, 1932, the son of George and Trientje (Gerdes) Pieper in Stoneham township, Chippewa County. He was baptized and confirmed at Immanuel Lutheran Church in Clara City. In 1950, he graduated from Clara City High School and went on to attend college at St. Olaf. When his father became critically ill, he returned home to help with the farm. He was then drafted into the U.S. Army, where he attained the rank of sergeant in the Korean War. Wendel was part of the 7th Infantry, 31st Regiment and received numerous combat service medals He was honorably discharged in November, 1954. Wendel was united in marriage to Betty Stark on June 10, 1956, at Salem Lutheran Church in Montevideo. Together they farmed and raised their family in the Clara City area. He was active as a 4-H leader and at Immanuel Lutheran Church. Family was important to Wendel and Betty and they always looked forward to attending their grandchildren’s Christmas programs, concerts, recitals and sporting events. After retiring from farming, Wendel and Betty loved traveling throughout the United States and especially enjoyed their trips to Alaska, Hawaii and a cruise through the Panama Canal. Central to Wendel’s life was his strong and abiding faith in God. He looked forward to his daily devotions and Bible study. Wendel passed away on Thursday, June 4, 2020, at the Clara City Care Center. He was 87 years of age. He is survived by his children: Randy (Julie) Pieper of Clara City, Tom (Diane) Pieper of Clara City, Cindy Moy of Hopkins and Amy DeBoer of Spicer, grandchildren: Kelly (Caleb) Kirk, Dillon (Rebecca) Pieper, Rebecca Pieper, Jason Huntley, David (Francis) Huntley, Luke Pieper, Emma Pieper, Matthew DeBoer, Leah DeBoer, Molly (Jake) Kovacs and Maya Moy, Great grandchildren, Sister: Eleanor Sandquist, Brother-in-laws: Bernie (De) Stark, Robert Stark and extended family and friends. He was preceded in death by his parents, sister Arline, and his wife Betty of 57 years.

Graveside services will be held on Wednesday, June 10th at 2 pm at the Immanuel Lutheran Cemetery. A private family service will be held prior and will be live streamed on the local Clara City channel and the church facebook page. Wendel... View Obituary & Service Information

The family of Wendel Pieper created this Life Tributes page to make it easy to share your memories.

Graveside services will be held on Wednesday, June 10th at 2...

Send flowers to the Pieper family.