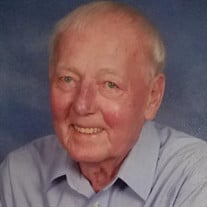 Wayne Bothun, 81 of Montevideo, passed away on Tuesday October 8th, 2019 at the CCM Health. Funeral services will be held on Friday, October 11th at 1:00 pm at Our Saviors Lutheran Church in Montevideo. Visitation will be held one hour prior to services at the church on Friday. Wayne was born in Granite Falls on July 8th, 1938, to Ed and Helen (Remillard) Bothun. He was baptized at Hawk Creek Church and was confirmed at Our Saviors. He grew up on a farm between Granite Falls and Sacred Heart and later moved to Montevideo. There he met the love of his life, Timmy Jane Zimmerman. Together they raised three children in Montevideo. Wayne began his career as a lineman by working for Don Peterson Electric. Later Wayne worked for REC and eventually started his own line construction business; Wayne’s Electric. In retirement, Wayne worked as a security guard for Prairies Edge Casino. Wayne had a mind for all things mechanical. He could look at something and determine how it worked. In his 50’s, Wayne achieved his dream of obtaining his private pilot’s license. He took great pride in flying his Mooney airplane. In recent days, Wayne enjoyed riding his golf cart, mowing his lawn, growing tomatoes, and visiting Bill’s Grocery on a daily basis. Wayne’s heart was full anytime he was in the presence of his children and grandchildren. Wayne is survived by his wife Timmy (Zimmerman) of Montevideo, son Jim (and Jan) Bothun of Watson MN, daughter Jane (and Dale) Wateland of Cottage Grove MN, and son Joey (and Michelle) Bothun of Crown Point IN; four grandchildren, Zach (and Bree) Bothun, Grace Wateland, Trent Bothun, and Paige Bothun, a great granddaughter Lorelai Bothun, sisters Wanda Kittelson, Avis Peters and brother Rodney (Nancy) Bothun and former sister in-law Bev Bothun. Preceding him in death were his parents and parents-in-law, sister Phyllis Billings, granddaughters Amber Dee and Megan Maree Bothun and brothers-in-law Kenny Billings, Wally Kittelson and Everet Peters.

Wayne Bothun, 81 of Montevideo, passed away on Tuesday October 8th, 2019 at the CCM Health. Funeral services will be held on Friday, October 11th at 1:00 pm at Our Saviors Lutheran Church in Montevideo. Visitation will be held one hour prior... View Obituary & Service Information

The family of Wayne Bothun created this Life Tributes page to make it easy to share your memories.

Wayne Bothun, 81 of Montevideo, passed away on Tuesday October...

Send flowers to the Bothun family.