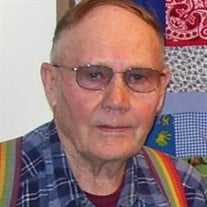 Walter (Wally) Joseph Sletten was born on December 16, 1930 in Pierpont, South Dakota to Joseph and Josephine (Tastad) Sletten. According to the US Government his birthday was November 16, so for many years we celebrated twice. This family was blessed with seven children. Wally was baptized and confirmed at Bethlehem Lutheran Church in Pierpont. He attended the one-room country school near the farm where he grew up. To get to school he would many times ride his horse who would then go back to the farm on her own. He graduated from the eighth grade and later (in 1968)(finally-ha ha) obtained his GED from the Montevideo Public Schools. Wally moved east to MN and began working for area farmers Stan Jacobson and Ray Knudson. While attending a basketball game with Ray, he met his wife to be LaVonne. It is a great story but not fit for this bulletin. March 28, 1951 in one of the snowiest winters in Minnesota, he was united in marriage to LaVonne Nygaard at Saron Lutheran Church in Montevideo, MN and began a farming career with his father-in-law, Oscar Nygaard, near Wegdahl, MN. To this union five children were born: Odell, David, Terry, Heidi (a/k/a LuAnn) and Timothy (Tim). Yep, 5 kids in 5+ years. The family is additionally blessed with 12 grandchildren and 15+ great grandchildren. Wally was a farmer his entire life and was active within his community. He served on a variety of farm related boards including the DHIA (Dairy Herd Improvement Association), ADA (American Dairy Association), MVBA, and was President of the local Farmer’s Union. He sang in the Male Chorus and was the Senior Citizen of the Year in 2003. Wally was very active in Saron Lutheran Church. For the last few years he and Dean Rodeberg sat together as the "church elders". He served on the council many times, participated in skits, sang as a soloist and in the church choir. Together with his wife LaVonne, they were square dancers, 4-H and Luther League leaders, and Senior Fiesta King and Queen in 2005. Wally became a member of the Masonic Lodge in 1976 and was active as a Mason and received the highest Masonic award, was a Shriner, which he joined in 1998, and The Order of Eastern Star. He served as an officer in all 3 organizations every year. He remembered everything (good and bad) in detail and built and rebuilt many horse drawn implements as well as constructing and engineering many other items. He loved to explain things to you by drawing on a napkin or scrap of paper. He had a calm patience about him. When a tractor accidentally rolled down the hill, or a horse cart ended up down in the ditch, he would say nothing and simply go retrieve them. Although Wally cherished his horses, he made numerous quilts for his children, grandchildren, and friends. Perhaps his greatest passion was his work with the Chippewa County Historical Society which he joined in 1996. For years, he and LaVonne were hosts at the Pioneer Village in Montevideo and at the Swensson Farm near Wegdahl. They also volunteered annually for Christmas in the Village and Wally was an interpreter at the Harness Shop during Heritage Week. However, Wally’s legacy to the Historical Society will be the annual Horse Power Event which he helped to implement in 2005. Besides organizing the event and driving his horses, he would also plant, cultivate, and water a crop of potatoes that would be harvested during the event. He loved to tell others how to harness and drive their horses, whether they wanted to hear it or not. Wally passed away on Sunday, November 4, 2018 at his home surrounded by his family. He was 87 years, 46 weeks and 1 day old and died as the result of pancreatic cancer. He is survived by his wife LaVonne; children: Odell (Susan) of Maple Grove, David (Dawn) of Montevideo; daughter-in-law Cheryl of Montevideo; Heidi (David) Lipps of Montevideo, Tim (Terry) of Huron, South Dakota; 9 grandchildren; 7+ great grandchildren; 3 step grandchildren; 8 step great grandchildren; and extended family and friends. He was preceded in death by his parents; all of his siblings including Rhoda Warner, Royal Sletten, Phyllis Cameron, Opal Cameron, Robert Sletten, and Mary Raap; and one son, Terry Sletten. Wally Sletten, 87, of Montevideo, died Sunday, November 4th at his residence. A Celebration of Life will be held on Saturday, November 17th at 11 am at Saron Lutheran Church. Visitation will be held on Friday, (November 16th) evening from 5 to 7 pm at the Wing-Bain Funeral Home in Montevideo and will continue one hour prior to services at the church on Saturday. Arrangements are with the Wing-Bain Funeral Home of Montevideo for Wally Sletten. In lieu of flowers a donation may be made to the charity of your choice.

Walter (Wally) Joseph Sletten was born on December 16, 1930 in Pierpont, South Dakota to Joseph and Josephine (Tastad) Sletten. According to the US Government his birthday was November 16, so for many years we celebrated twice. This family was... View Obituary & Service Information

The family of Wally Sletten created this Life Tributes page to make it easy to share your memories.

Send flowers to the Sletten family.