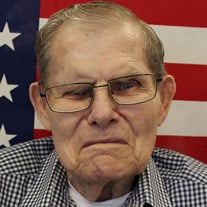 Due to impending weather the visitation will be held from 2:00 to 4:00 pm Saturday, January 16th at the Wing-Bain Funeral Home in Granite Falls followed by a private family service. Masks and social distancing will be observed. Wallace Anderson,... View Obituary & Service Information

The family of Wallace Anderson created this Life Tributes page to make it easy to share your memories.

Due to impending weather the visitation will be held from 2:00...