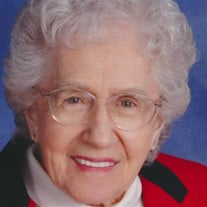 Vivian Lorraine Rasmussen was born July 19, 1924, to Richard and Geneva (Brennan) Folkens in St. Paul, Minnesota. The family later moved to Clinton, and then to Granite Falls, Minnesota. She was baptized in Clinton and later confirmed at St. Paul Lutheran Church in Granite Falls. At the age of 17, she moved to Chicago, IL, to live and work with her cousin as a waitress. She returned to Granite Falls where she met and married the love of her life Lloyd Rasmussen on May 14, 1944. Vivian worked at Carl’s Bakery, the Hwy 212 Café, and the Veteran’s Service Office. In 1959, the family moved to California. While in California, Vivian attended adult education classes and proudly graduated from Downy High School with her high school diploma. Granite Falls was always home and the family excitedly returned in 1961. Vivian continued to work as a mother and homemaker until 1967, when she went to work as the Yellow Medicine County Deputy Clerk of Court for 20 years until her retirement in 1987. In her early years, Vivian enjoyed dancing, bowling, traveling, fishing, and following the Granite Falls Kilowatt amateur baseball team. She later became an avid TWINS fan. She was active at St. Paul Lutheran Church teaching Sunday School and Vacation Bible School. She was a member of LWML, serving as secretary. With Lloyd, they served as Dinner at Your Door Coordinators, helped establish the church cemetery fund and board. They were also active as church representatives to the Minnesota North Aid Association of Lutherans. Where you found Lloyd, you would find Vivian. Following retirement, Vivian spent time helping care for her three grandsons and attending their many activities. They were the joy of her life. Vivian lived independently in her home of 56 years until the last two weeks of her life. She died peacefully surrounded by family on Saturday, November 4, 2017, at the Granite Falls Health Care Center at the age of 93 years. Cherishing Vivian’s memory is her daughter Terri (Frederick) Tillma, Brookings, South Dakota; grandsons: Matthew Tillma and friend Kara Knott, Kansas City, Missouri; Jayson (Alexa) Tillma, Brookings, South Dakota; Ryan Tillma and fiancé Rebecca Riter, Iowa City, Iowa; sister Eleanor (Clifford) Marholz, Montevideo, Minnesota; brother Jim (Phyllis) Folkens, Okeechobee, Florida; sister-in-law Marlou Folkens, Granite Falls, Minnesota; several nieces and nephews and special friends Earl and Rita Christianson. Preceding Vivian in death were her husband Lloyd of 68 years; her parents; her brother Richard, Jr.; sister and brother-in-law Bette (John) Spangenberg; half-brother Frank; along with her mother and father-in-law Mary and George Rasmussen.

Vivian Lorraine Rasmussen was born July 19, 1924, to Richard and Geneva (Brennan) Folkens in St. Paul, Minnesota. The family later moved to Clinton, and then to Granite Falls, Minnesota. She was baptized in Clinton and later confirmed at... View Obituary & Service Information

The family of Vivian Rasmussen created this Life Tributes page to make it easy to share your memories.

Send flowers to the Rasmussen family.