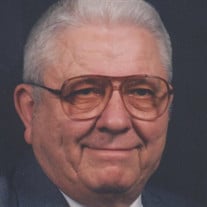 Virgil “Bill” W. Schrupp was born August 15, 1925, the youngest of five children, in Wood Lake, the son of Louis & Carolina (Pochardt) Schrupp. He was baptized at St. John’s Lutheran Church in Wood Lake and confirmed there in 1939. Bill graduated from the Wood Lake High School in 1942. He attended Machine Trade School for a few months in the Fall of 1942, and stayed home and farmed with his father until 1945. He served his country in the United States Army after being drafted in June of 1945. He was honorably discharged in November of 1946. Following his military service, he worked at the Radisson Hotel as a supper club waiter. He moved to northern Minnesota and was a Night Bellman for Breezy Point Lodge. During his free time during the day he found extra work, guiding woodland trails for the riding stable. By mid-summer he had bought a string of horses and tack. The following year he arranged to lease a few more horses and operated the stable at Nisswa and Pine Beach. He worked three seasons, while attending Brainerd Junior Business College during the winter, graduating in 1949. He was united in marriage to Vivian Larson on October 22, 1949, in Brainerd. They moved to Bricelyn where he worked for the Minnesota Valley Breeders Association as a dairy inseminator. In 1952 he was transferred to Montevideo and worked with there until the fall of 1964. He took a position with Prudential Insurance Company and in 1965 became Branch Manager for Production Credit Association. In 1977 he found a position with Aid Association for Lutherans. Vivian passed away in May of 1986. Two years later he married Jorena Dotseth in 1988, and she passed away in October of 1992. Bill passed away on Tuesday, November 7, 2017, at Luther Haven Nursing Home. He was 92 years of age. He is survived by many nieces and nephews and extended family and friends. He was preceded in death by his parents, his wife Vivian and Jorena; and siblings: Arnold, Lorena, Les and Alice.

The family of Virgil Bill Schrupp created this Life Tributes page to make it easy to share your memories.

Send flowers to the Schrupp family.