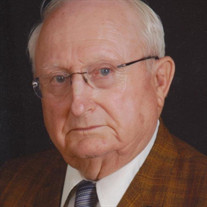 Vernon Albert Priebe was born September 26, 1932, the son of Arthur and Clara (Harguth) Priebe, in Stoneham Township, Chippewa County. He was baptized, received his first communion and confirmed at St. Clara Catholic Church. He attended St. Clara Parochial School. As a young man, Vernon worked road construction for Fransen Construction in Maynard and later Berghuis Construction, building highways, including Interstate 94. After several years, he began working for the Chippewa County Highway Department and spent 25 years with them. He enjoyed the outdoors, fishing and hunting. His favorite trips were to Colorado to hunt elk. Vernon liked reading, history, buying cars and was an avid collector of guns, coins and John Deere toys. He was always tinkering with something and trying to make it suitable for his needs. Vernon was a faithful member of St. Clara Catholic Church and the Knights of Columbus. He passed away on Wednesday, November 7, 2018, at the Clara City Care Center. He was 86 years of age. He is survived by his brother Bernard Priebe of Albert Lea; nieces and nephews: Brian (Eva) Priebe of Maynard, Jim (Vickie) Gunter of Spicer, John (Sue) Gunter of Green Valley, Arizona, Larry (Kathi) Gunter of New London, Pam (Mark) Patnode of Blaine and Marcia (John) Hauck of Andover. He was preceded in death by his parents, brother Allen (Gertrude)Priebe, sister Marcella (John) Gunter; sister-in-law Eva Priebe and two nieces: Mary Ellen Gunter and Mary Ann Priebe. Blessed be his memory.

The family of Vernon Priebe created this Life Tributes page to make it easy to share your memories.

Send flowers to the Priebe family.