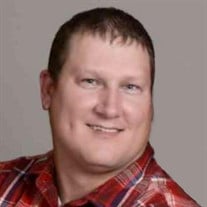 Trevor Luepke, 38, of Granite Falls, passed away at his residence on Thursday, May 6th. Memorial service will be held on Wednesday, May 12th at 4 pm at the Granite Falls Lutheran Church. Visitation will be held Tuesday evening from 4 to 7 pm with a prayer service at 7 pm at the Granite Falls Lutheran Church and will continue one hour prior to the service on Wednesday. Trevor Allen Luepke passed away peacefully at his home with family by his side in the early morning hours on May 6th, 2021 after a tough, six-month battle with stage-4 pancreatic cancer. Trevor was born on October 5, 1982 to Lee Luepke and Brenda (Ryer) Luepke in Willmar, Minnesota and baptized at St. Paul Lutheran in Granite Falls, Minnesota. Trevor attended Granite Falls, Montevideo, and Willmar schools while growing up, during which he got into a lot of mischievousness with his brothers, cousins, and his aunt Kelly. He also grew up with a wrench in his hand, learning his craft from working at his father’s shop, Lee’s Auto, for around ten years, during which he got his ASE certification. He then went on to work at Cargill in Gluek, Minnesota for a couple years, before landing a job as the Yellow Medicine County diesel mechanic, where he worked for the past ten years. During this time, Trevor devoted fifteen years as a volunteer firefighter for the Granite Falls Fire Department. Trevor met the love of his life, Jenna on July 22nd, 2000, where she fell in love with the Luepke dimples and unique laugh. They married six years later to the date at Clarkfield Lutheran Church. Throughout their relationship they had three beautiful daughters, Kiersten (2004), London (2010), and McKendree (2012). He was a very family-oriented person, spending many hours of quality time with his family. Trevor had a love for camping at the lake, where he would often go fishing, have boat rides, and spend time with family and friends. He also had a love of tinkering with anything with an engine. When he wasn’t doing these things, he also watched Nascar races, in which he always supported Kevin Harvick, along with Vikings games and numerous science-fiction and horror movies. Trevor leaves behind his wife of almost fifteen years, Jenna (Staab) Luepke his daughters Kiersten, London, and McKendree of Granite Falls, Minnesota; twin brother Travis (Jennifer) Luepke; brother Ryan (Ashley) Luepke all of Granite Falls, Minnesota; step-brother Adam (Brenna) Grund of Granite Falls, Minnesota. Half-brothers: Jordan (Jennifer Irvine) Luepke, and Aaron Luepke, all of Granite Falls, Minnesota; father Lee (Julie) Luepke from Granite Falls, Minnesota. He also leaves behind twelve nieces and nephews, along with many other relatives. Trevor is preceded in death by his mother, Brenda (Ryer) Luepke; grandfathers ValGean Ryer and Dale Luepke; grandmother Joanne (Reinke) Luepke; aunt Val Ryer; and uncle Doug Ryer. Blessed be his memory

Trevor Luepke, 38, of Granite Falls, passed away at his residence on Thursday, May 6th. Memorial service will be held on Wednesday, May 12th at 4 pm at the Granite Falls Lutheran Church. Visitation will be held Tuesday evening from 4 to 7... View Obituary & Service Information

The family of Trevor Luepke created this Life Tributes page to make it easy to share your memories.

Trevor Luepke, 38, of Granite Falls, passed away at his residence...

Send flowers to the Luepke family.