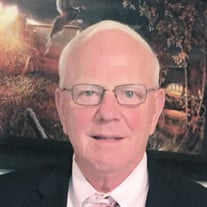 Tom Turk, age 77, of Montevideo, Minnesota passed away Monday, December 6, 2021, in Montevideo at Brookside Senior Living. A Memorial Service will be held, Saturday, December 11, 2021 at 12:30 PM at Milan American Legion in Milan. Visitation will be one hour half prior to the service. Thomas Eugene Turk was born on June 1, 1944 in Brainerd, MN to Albert and Mildred May (Anderson) Turk. He was confirmed at the Crosby Lutheran Church. He graduated from Crosby Ironton High School in 1962. Soon after graduation he went to work for Hallett Construction Company and he continued to work there until the company decided to move out of state in 1986. Tom didn’t feel like uprooting his sons, Jeff and Brandon, so he went to work at Breezy Point Resort in 1987. He worked at Breezy Point until this young man who worked with him approached him about starting their own company. In 1998 Tom and Neal Narveson joined forces and founded Narveson Management Inc. Tom worked as the CFO until Alzheimer’s forced him into retirement in 2017. Tom and Neal not only worked together they enjoyed traveling to Canada, North Dakota and Montevideo to hunt anything from A to Z. They especially enjoyed goose hunting in Watson. It was there that Tom found and married Denise. After retiring Denise decided she need the support of her family to help take care of Tom, So they moved to Montevideo in 2017. Tom lived at home until it was necessary for his safety to put him in assisted living where he passed away on December 6, 2021. Tom was involved in Pheasants Forever, Deer Hunters, Ducks Unlimited and loved a good meat raffle nothing made him happier than winning the meat raffle than giving it away. Some may also remember he “liked” pull tabs and supported a “few” organizations over the years. He had been a member of the American Legion groups for over 30 years. Tom is survived by his wife, Denise; his sons, Jeff and Brandon (fiancée Sally), his daughter-in-law Amy; Denise’s sons, Tate and Lucas; grandchildren, Cassandra (Mitch), Cayden, Colten, Carson and one great grandson Liam. Tom will be fondly remembered for his favorite saying “you can’t put a price on a good time,” and that is exactly how he lived his life and is now dancing happily in heaven. In lieu of floral arrangements memorials preferred to go to Brookside Senior Living or Alzheimer’s Association.

The family of Thomas Turk created this Life Tributes page to make it easy to share your memories.

Send flowers to the Turk family.