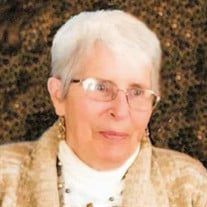 Teresa “Terry” Kinman, age 74, of Montevideo, Minnesota died Wednesday, December 1, 2021 at Methodist Hospital in St. Louis Park. A Memorial Mass of Christian Burial will be held on Friday, December 17, 2021 at 10:30 AM at St. Joseph’s Catholic Church in Montevideo. Visitation will be held one hour prior to the service at the church. Interment will be in the Spring of 2022 at the St. Joseph’s Catholic Cemetery. Teresa Elizabeth Kinman was born on October 28, 1947 in Montevideo, Minnesota, the daughter of Vernon and Audrey (Blom) Jahn. She was baptized at St. Joseph’s Catholic Church as an infant. In 1952, Terry moved with her family to Corona, California and began school there. They later moved to San Jose, California where she was confirmed at St. John Vianney Church and she also attended the James Lick High School. She graduated with the Class of 1965 from Overfelt High School in San Jose, California. Terry was united in marriage to Larry Kinman on November 23, 1968 at St. John Vianney Church in San Jose, California. She went to school for drafting and took a job designing the trailers that hauled liquid oxygen. She did data processing at Lake Tahoe. Terry and Larry moved back to Montevideo in 1990. She continued working outside the home at various places doing many different things through the years. One of the last places she worked was at an assisted living home where she would help others with their cares and Terry would even bring the residents home with her for the holidays. Terry enjoyed painting and drawing. She would talk to anyone she met and if you combined it with a cup of coffee, Terry was in her element. She had a big heart and cared for others. At any time, she would drop what she was doing just to help another and many times thru the years she would open her homes to kids that needed a spot. Terry enjoyed bantering back and forth and had many witty comebacks. Terry is survived by her sons, Thomas, Robert “Keith”, Andrew (Shantel), Nicolas all of Montevideo; grandchildren, Aaron, Joshua, Cameron, Jayla, Koyer; great grandchild, Chloe; siblings, Pat (Al) Cassel of Michigan, Ann Randello of California, Judy Jahn of Minnesota, Peggy (Mike) Doukas of Washington, Pam Jahn of Washington, Jeff Jahn of Minnesota, Joe (Danelle) Jahn of California, Steve (Rhonda) Jahn of California, Beth Jahn of California, Jacquie (Ken) Peacock of California; brothers and sisters-in-law, Barbara Kinman of Oklahoma, Joni Calder of California, Lori Calder of Texas, Craig (Penny) Calder of California; as well as numerous nieces, nephews, other relatives and friends. She is preceded in death by her parents, Vernon and Audrey Jahn; husband, Larry; father and mother-in-law, Ella and Virgil Kinman; step father, Harold Calder.

The family of Teresa "Terry" Kinman created this Life Tributes page to make it easy to share your memories.

Send flowers to the Kinman family.