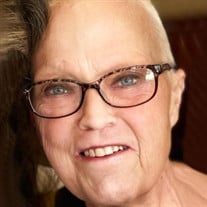 Teresa Berg, age 63, of Montevideo, Minnesota passed away Thursday, January 20, 2022 at CCM Health in Montevideo. A Celebration of her life will be held later this year. Teresa Lynn Berg was born January 10, 1959, in Sioux Falls, South Dakota to Maurice and Georgieana (Sechser) Christensen. She was baptized at Our Mother of Mercy in Centerville, South Dakota and confirmed at St. Maria Goretti Catholic Church in Long Beach, California. Teresa began school at Raymond District #25 and in 1969, her family moved to Long Beach, California where she finished her education and graduated from the Lakewood High School in 1977. After graduating, Teresa embarked on her own and moved to Hobson, Montana. She worked many years in food service, tending bar, waitressing and even managed a cafe. Teresa met Roger Berg and together they were blessed with their daughter, Britni. In the early 1990’s they moved to Ray, North Dakota where together they owned and operated the local Clothing and Variety Store. Teresa also worked at Medical Arts Press in Ray. On September 6, 1995, Teresa and Roger tied the knot in Elko, Nevada. In 2009, Teresa and Roger moved back to Montana and settled in Lewiston. She worked at the Montana Mental Health Care Center where she was everyone’s favorite. She had a gift for drawing the best out of the residents and brightening their day. Teresa enjoyed crocheting everything from blankets to small pan scratchers and she loved to give the items to others. She was everyone’s friend and her smile and infectious laughter was contagious. Teresa’s addictive personality that bordered on the edge brought joy and comedy to those in her life. Teresa moved to Montevideo February 2019 to be near her daughter, who lovingly care for her. On Thursday, January 20, 2022, she passed away at CCM Health at the age of 63 years and 10 days. Teresa is survived by her daughter, Britni (Josh) Schueler of Montevideo; siblings, Carmen Christensen of Hurley, SD, Maureen (Joe) Garry of Hurley, SD, Keven (Carrie) Christensen of Salem, OR, Monica (John) Hughes of Riverside, CA, Sheila Holm of Hurley, SD, Ken (Cindy) Christensen of St. Paul, OR, Lisa (Jeff) Smart of Indio, CA; sister-in-law, Sandy Gaugh of Lakewood, CA; as well as many nieces, nephews, other relatives and friends. Teresa was preceded in death by her parents, Maurice and Georgieana; husband, Roger; brothers, Jeffery, Craig, Bradley (Sally), Derald; nephew, Gary Christensen.

The family of Teresa Berg created this Life Tributes page to make it easy to share your memories.

Send flowers to the Berg family.