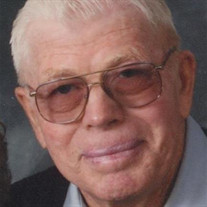 The Lord called Stanley Jacobson home on May 10, 2018 after a long life filled with family, farming, church and community. He was born in Stony Run Township outside of Granite Falls, MN, on December 9, 1923, to Herbert and Ruth (Pederson) Jacobson. Stanley attended country school, was confirmed at Saron Lutheran Church and was a 1941 graduate of Granite Falls High School. In 1949, he met and married the love of his life, Gloria Skjelset, in Montevideo, a union that lasted 62 years until Gloria’s death in 2012. Farming was Stan’s life’s calling. He spent nearly his entire life on the farm where he grew up north of Granite Falls where he raised crops, beef cattle and hogs. Giving back to his community was a strongly held value and something Stan did throughout his life. He shared his leadership talents by serving on several Boards of Directors throughout the area. This includes 25 years on the Minnesota Valley Rural Electric Cooperative, the Chippewa County Board of Commissioners, Granite Falls School Board, Luther Haven Board and the Federal Land Bank Board. Stan was an active and faithful life-long member of Saron Lutheran Church. He was highly respected for his gentle salt-of-the-earth manner, fairness, honesty and integrity. Stan spent the final years of his life at Copper Glen Assisted Living and Luther Haven in Montevideo. He was preceded in death by his parents; wife, Gloria; sisters, Helen Ockwig and Phyllis Summers. Stan leaves behind his three children: Mike (Nancy) Jacobson of Rockville, Maryland, Linda Jacobson (Bill Warner) of River Falls, Wisconsin and Steve (Karen) Jacobson, rural Maynard, Minnesota; grandchildren: Scott (Michelle May) Jacobson of rural Granite Falls, Thomas (Collene) Jacobson of rural Maynard, Katie and Mark Jacobson of Rockville, Maryland, Kaija, Erik and John Warner of River Falls, Wisconsin; three great-grandchildren; brothers, Gordon (Audrey) Jacobson of Cross Lake and Bruce (Pat) Larson of Gilbert, AZ. Stan was laid to rest following a celebration of his life at Saron Lutheran Church, rural Maynard on Tuesday, May 15, 2018. In lieu of flowers, the family prefers memorials go to Saron Lutheran Church, the American Cancer Society or an organization of the donor’s choice. Arrangements are with the Wing-Bain Funeral Home of Montevideo

The Lord called Stanley Jacobson home on May 10, 2018 after a long life filled with family, farming, church and community. He was born in Stony Run Township outside of Granite Falls, MN, on December 9, 1923, to Herbert and Ruth (Pederson) Jacobson.... View Obituary & Service Information

The family of Stanley Jacobson created this Life Tributes page to make it easy to share your memories.

Send flowers to the Jacobson family.