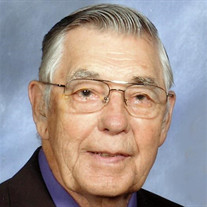 Simon Harm (Bud) DeGrote was born to Peter Simon DeGrote and Minnie Margaret Freese DeGrote on April 4, 1930, in Chippewa County north of Clara City, Minnesota. Pastor Kumpf baptized Bud at Immanuel Lutheran Church in Clara City on April 27, 1930, the same year that the church building was completed. Bud was confirmed at Immanuel on March 25, 1945. Bud attended District 43 Country School. Bud and Erma Klenke married on January 29, 1953, in Clara City. Bud served in the United States Army from March 1956 until March 1958. He was a dedicated member of the Clara City Community. He served on the City Council and on Immanuel committees. He was a longtime member of the Lions Club and a founding member of the Clara City Volunteer Ambulance Service. Bud started his lifetime work of auto body and repair in the Phillips 66 gas station in Clara City in 1960. In 1965, Bud and Erma purchased the building next door, and Bud started DeGrote Auto Sales. Bud retired in 1992, but in retirement, he enjoyed many years of farming with the Bluhm family during planting and harvesting seasons. Bud worked hard as a means to enjoy life. From his earliest years with his brothers, he enjoyed fishing and hunting. Snowmobiling was both a business and a pleasure. In 1974, he and Erma enjoyed a snowmobiling trip to Yellowstone National Park, a prize Bud won from the Polaris company. For many years, Bud and Erma wintered in Donna, Texas. Bud and Erma’s cabin on Lake Minnewaska was one of Bud’s favorite places. “Going to the lake” is a family ritual that has been embraced by all of Bud’s children and grandchildren. Bud is survived by Erma, his wife of 65 years, and children Judy and Brad Korn, Alexandria; Bruce and Joyce DeGrote, Sauk Rapids; and Cindy and Harlan Steenstra, Loretto. His grandchildren are Jeremy Korn and Mary Stade, Minneapolis; Barry Korn, Roseville; JoAnna and Josh Breding, Horace, North Dakota; Angie DeGrote, St. Cloud; Jodi DeGrote and Pete Atterberg, Fargo, North Dakota; Brian DeGrote, Monticello; Nathan Steenstra, Loretto; and Nicole Steenstra, Loretto. Bud’s great grandchildren are Sophia, William, and Claire Breding. Bud is also survived by his brothers and sisters-in-law: Harm and Marilyn DeGrote; Frances and Willy DeGrote; Virgil and Jeanne DeGrote, and Mary Klenke, and many nieces, nephews, and extended family. Preceding Bud in death were his parents; his parents-in-law, Grace and August Klenke; brothers-in-law Clarence Klenke and Louis DeBower, and sister-in-law Evelyn DeBower

The family of Simon 'Bud' DeGrote created this Life Tributes page to make it easy to share your memories.

Send flowers to the DeGrote family.