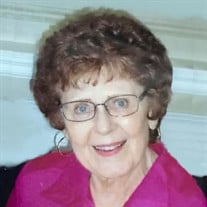 Shirley Ann (Winge) Thompson was born on March 15, 1929, the daughter of Peter and Nettie (Lee) Winge in Fairfax, MN. Shirley’s family moved to Dawson, MN, where she was confirmed and graduated from Dawson High School. Shirley attended business school in Minneapolis, MN and returned to the Dawson area. In Dec. of 1950, Shirley was united in marriage to Randolph Thompson. They made their home in Montevideo, MN, where they remained for 53 years. Randolph died in April of 2004 and in October of 2013, when kidney dialysis became necessary, Shirley moved to Minnetonka where she resided with her daughter Kim and husband Greg. In September of 2016, Shirley became a resident of The Landings of Minnetonka Assisted Living Home where on Wednesday, November 14th, 2018, with her loving daughter Kim and lifelong friend Gabe by her side, Shirley died peacefully at the age of 89 years. In her younger years Shirley was an employee of Zaiser Dairy in downtown Montevideo before moving down the street to manage the Montevideo Credit Bureau for many years, retiring in the 1980’s. Retirement, however, did not last long as her and Tom purchased The Hutch Clothing Boutique in 1985. Tom and Shirley enjoyed many years in the clothing business, finally retiring in 1993. Shirley was an active member of the Eastern Star, Ladies Bowling League and the Our Savior’s Lutheran Church Circle where she thoroughly enjoyed serving on the wedding and funeral committees and participating in the annual fall dinner. In her retirement, Shirley took up folk art painting. She had more time for her love of gardening and spent time in the kitchen cooking, canning and baking. She also loved visiting her daughter and son-in-law Kim & Greg and her grandchildren, Zach & Tony. Shirley is survived by her daughter Kim (& Greg) Zechmann of Minnetonka, MN; her beloved grandsons Zachary Thomas (& Jessi) Zechmann of Maple Grove, MN and Anthony John (& special friend Rebecca) Zechmann and ‘grand-dog’ Tom, of Spring Park, MN; several nieces, nephews and sister-in-law Judy Winge of Montevideo, MN. She was preceded in death by her parents; her husband, Randy; brothers, Phillip, Keith, twin brothers, Leland and Lyle and their wives Hannah, Bernice and Lois.

The family of Shirley Thompson created this Life Tributes page to make it easy to share your memories.