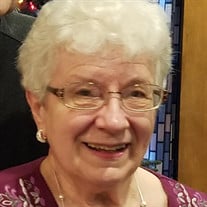 Shirley Maroney, 82, of Maynard passed away at her residence on Friday, August 14th. Public visitation will be held on Friday, August 21st from 1 to 2:30 pm at the Maynard Lutheran Church. Face coverings will be required and social distancing maintained. A private family service will be held following the visitation. Shirley Lavonne (Hubel) Maroney aka "Curly Shirley" was born November 25, 1937, the daughter of Penny & Helen (Spletter) Hubel in Maynard. She was baptized and confirmed in the Lutheran Church. She attended school and graduated from the Maynard High School in 1955. Following graduation Shirley worked for the Maynard School District as a Secretary for a year. She then moved to Minneapolis where she worked for Honeywell. Shirley was united in marriage to Thomas Maroney on January 17, 1958, in Mankato. They lived in Worthington, where she worked as a secretary at a cemetery until they started their family. They then moved to Storm Lake, Iowa in 1959, where they added two to more to their clan. In 1962, they moved to Maynard as Tom purchased the Standard Station and they completed their family. Once the kids were grown Shirley sold Avon for a number years and was employed at the Maynard Post Office. She also worked seasonally at the scale house for the beet plant. She retired, due to failing health in 2005. Shirley and Tom enjoyed traveling and spending time with family and friends. Shirley passed away on Friday, August 14, 2020 at her residence. She was 82 years of age. She is survived by her husband Tom; children: Jody (Scott) McConkey of St. Clair, Melanie (Paul) Tysver of Fergus Falls, Patrick (Chrissy) Maroney of Montevideo and Shawn (Kathy) Maroney of Montevideo; grandchildren: Adam (Kelsey) McConkey, Lauren (Tony) Mendez, Ian McConkey, Kalin (Jamie) Amundson, Shauna (Andy) Loxtercamp, Chelsea Maroney, Jaden Maroney (special friend Jasmine), Zachary Maroney, Ryan Maroney and Kailey Maroney; great grandchildren: Dominick Mendez, Isabella Amundson, Claire Amundson, Keegan Amundson, Aubrey Loxtercamp, Ava Loxtercamp, Jack Loxtercamp and Carter Maroney; siblings: Kenneth (Roberta) Hubel of Pittsfield, Maine; Dave (Jerri) Hubel of Montevideo and Dianne (Gene) Goldenstein of Granite Falls; several nieces, nephews and extended family and friends. She was preceded in death by her parents.

Shirley Maroney, 82, of Maynard passed away at her residence on Friday, August 14th. Public visitation will be held on Friday, August 21st from 1 to 2:30 pm at the Maynard Lutheran Church. Face coverings will be required and social distancing... View Obituary & Service Information

The family of Shirley Maroney created this Life Tributes page to make it easy to share your memories.

Shirley Maroney, 82, of Maynard passed away at her residence...

Send flowers to the Maroney family.