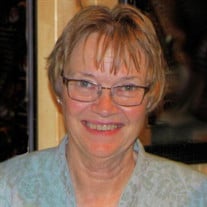 Sharon Kay Emkes was born September 18, 1941, in Montevideo, Minnesota to Alfred and Rachel (Arends) Tammen. Sharon was baptized and confirmed at Immanuel Lutheran Church in Clara City. She went to Maynard Public School than later attended Miller Hospital Vocational School of Practical Nursing in St. Paul. Sharon and Harlis were married on September 11, 1965, at Immanuel Lutheran Church in Clara City. The couple lived in rural Montevideo and began a family. They were blessed with two sons, Daren and Noel. Sharon began working as an LPN at Miller Hospital in St. Paul and later at Chippewa County Montevideo Hospital. She enjoyed helping others and nursing others back to health was a joy to her. When it came to the farm, Sharon was there to assist Harlis in caring for the animals or running a tractor. Sharon loved gardening and was a master gardener. She enjoyed decorating cakes, fishing and reading books. Her family was her world and her grandchildren were the light of her life. Sharon passed away on Monday, February 24, 2020 at her home surrounded by her loving family. Sharon is survived by her husband, Harlis Emkes of Montevideo; children, Daren (Renae) Emkes of Maynard, Noel (Courtney) Emkes of Clara City; grandchildren, Danielle (fiancé, Wesley Oswald), MaKayla (Saam) Huber, Aubree Schoumaker, Hayden Emkes, Landon Emkes; sisters, Shirley (Wayne) Anderson of Dawson, Dodie (Jim) Sletten of Maple Grove; brother, Mark (Kathy) Tammen of Maynard, as well as many nieces, nephews, other relatives and friends. Sharon was preceded in death by her parents, Alfred and Rachel Tammen; brother, Ronald Tammen.

The family of Sharon Emkes created this Life Tributes page to make it easy to share your memories.

Send flowers to the Emkes family.