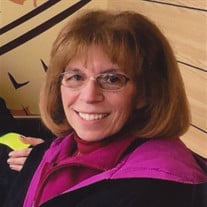 Sandra Joy (Hein) Anderson was born on March 16, 1949. She passed away on May 19, 2019 at the Chippewa County Montevideo Hospital. Sandra grew up in Princeton, Minnesota and graduated from Princeton High School. She continued her education at St. Cloud State College and graduated in 1971 with a Bachelor of Science degree in Elementary Education. Sandra began her 37 year career in education in Wood Lake, Minnesota as a Title 1 administrator and reading teacher for grades one through five. In 1974, she accepted the position in Montevideo as Educational Specialist working as a liaison with the University of Pittsburgh. From 1975-2008, Sandra taught first graders how to read. She always said, “Teaching is not a profession, it is a passion.” Sandra has followed many of her student’s lives through adulthood, successful careers and to having families of their own. Each and every one has warmed her heart. During her educational career, Sandy continued to learn, earning a Reading Specialist degree from St. Cloud State College and a Master’s degree in Elementary Education from the University of Minnesota. She was inducted into Outstanding Elementary Teachers of America in 1972. Sandra was the recipient of the National Citizenship Education award and was later chosen as the Minnesota Teacher of the Year for Patriotism, Senator Mark Dayton even listed her in the Senate Congressional Record at that time. She has been listed on three separate years in Who’s Who of American Teachers. Sandy considered one of her most satisfying accomplishments to have field tested the New Reading System (NRS) for the University of Pittsburgh and to have co-written with her cherished longtime friend, Sue Luebke, an instructional worksheet program to supplement this reading curriculum. Sandy and Dennis met while both were at St. Cloud State College and they were married on July 24, 1971 in an ecumenical service at Trinity Lutheran Church in Princeton, Minnesota. The couple moved to Montevideo and together they shared a lifetime devotion to each other for nearly 48 years. They both shared a passion for supporting American’s Veterans and took great pride in achieving the opening of the Montevideo Community based Outpatient Clinic in 2002. Together they enjoyed traveling, spending time with friends, and working in the yard. Sandy enjoyed photography, gardening, collecting angels, reading, making cards, crafts and valued as life’s most important asset simply being with friends. Sandy is survived by her loving husband, Dennis Anderson of Montevideo; sister-in-law, Sue Hein, nieces, Kristina, Kristen, Heidi; nephews, Eric, Ryan; brothers-in-law, Don (Karen) Anderson, Steve Anderson; as well as other relatives and the many, many friends who became her CHOSEN family.

Sandra Joy (Hein) Anderson was born on March 16, 1949. She passed away on May 19, 2019 at the Chippewa County Montevideo Hospital. Sandra grew up in Princeton, Minnesota and graduated from Princeton High School. She continued her education... View Obituary & Service Information

The family of Sandra Anderson created this Life Tributes page to make it easy to share your memories.