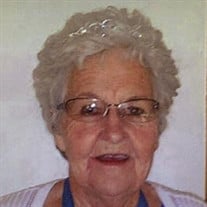 Memorials in lieu of floral arrangements may be directed toward the Brookside Senior Living Walking Path or the United Methodist Church Prayer Garden. Ruth Marie Samuelson was born on November 3, 1930 in Wadena, MN to Reverend Harold & Ella (Christensen) Bueide. She grew up in the Lutheran faith, was baptized in Sebeka, MN and later confirmed in Wallace, SD where she also attended school through her freshman year. Her last three years of school were spent at Oak Grove Lutheran High School in Fargo, ND where she lived on campus and graduated in 1948. After graduation, Ruth and her best friend/roommate, Lorrie, moved to Minneapolis and worked at a bank. After a year, she decided the big city was not for her and moved to Willmar, where she met Paul at the roller skating rink. Ruth and Paul were united in marriage on October 7, 1950 at Eagle Lake Lutheran Church north of Willmar, officiated by her father. After their marriage, they moved to Montevideo, where they lived their lives and raised five daughters. She and Paul enjoyed traveling to northern Minnesota, Montana and other areas that sparked their interest. In later years, she and friend Bernetta went on numerous bus trips around the US and some cruises, including Alaska. She was a faithful member of the United Methodist Church and her ability to help in any way she was able was important to her, as was her faith in the written word and the promise of everlasting life. Ruth loved to be outside soaking up the sunshine, working in her flower gardens and feeding the variety of birds in her yard; cardinals and hummingbirds were a couple of her favorites. She looked forward to visits from her daughters and their families and was always ready to attend any activities they were involved in. Ruth’s love for music was apparent when you walked into her home as the radio would always be playing a variety of genres. She was a member of the MN Valley Concert Association and enjoyed attending those events with friends as well. In 2012, Ruth moved to Brookside Senior Living and loved the time that she lived there, especially moving into the new building this past October, where she had a beautiful view of her church and prayer garden. She spent countless hours walking to the church, prayer garden, Luther Haven and would often be seen sitting on her walker or the bench watching the traffic pass by on Highway 7 and 11th Street. Ruth was called from this life on Jan. 21, 2018, at the St. Cloud Hospital. She was 87 years of age. Ruth is survived by daughters: Paulette (David) Korsmo, Willmar; Lynette (Dave) Arends, Montevideo; Marcia (Rick) Chambers, Willmar; Karen (Keith) Hendrickson, Woodland Park, CO; Bonnie Crosby, Montevideo. Sixteen grandchildren: Brent Roelofs, Jamie (Sara) Roelofs, Marissa (Brett) Lauer; Chad (Carol) Arends, Paul Arends, Angela (Friend Ryan Albertson) Ashling; Eric (Erin) Chambers, Erin Chambers; Andrew (Maria Cecilia) Hendrickson, Katie (Jill Lippard) Hendrickson, Dana (Carl) Persson, Kayla Hendrickson, Isaiah Hendrickson; Joshua (Sarah) Crosby, Ryan (Chelsie) Crosby, Bethany Crosby; thirteen great- grandchildren: Hannah Roelofs, Bella & Eva Lauer; Garrett, Amery, Gavin & Anika Arends, Jada & Devin Ashling; Anabel & Lillian Persson; Camryn Crosby, Carter Crosby. sister & sister-in-law: Helen Bergeland, Dawson; Margie Bueide, New Milford, CT; brother: David (Ginny) Bueide, Minneapolis as well as numerous nieces, nephews and other relatives. She was preceded in death by her parents; husband, Paul; son-in-law, Jeffrey Crosby; brother, James Bueide; sisters, Carol Bueide, Margaret Bueide & Ann Zaudtke Spencer; brothers-in-law, Ron Zaudtke, Harlowe Bergeland and numerous other extended family and friends. Blessed be her memory.

The family of Ruth M Samuelson created this Life Tributes page to make it easy to share your memories.

Memorials in lieu of floral arrangements may be directed toward...

Send flowers to the Samuelson family.