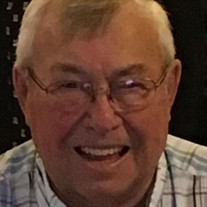 Russell John Tepfer, the son of Albert and Esther (Gens) Tepfer, was born on September 4, 1936 in Danube, Minnesota. He was baptized and confirmed at the St. Matthew’s Lutheran Church in Danube. He graduated from Danube High School in 1955, and worked on the family farm. Russell served his country in the Army and the Army Reserves from 1956-1962 when he was honorably discharged. He was united in marriage to Marilyn DeAnn Hendrickson on June 6, 1959. They made their homes in Danube, Maynard, and Wang Township before finally moving to Clara City after retirement. Russell was an outgoing, friendly and hardworking man who could strike up a conversation with anyone. He enjoyed hunting, fishing, camping, being a craftsman, creating new projects, and working in his garden. He had a love for horses, farming and colleting John Deere toy tractors. He was a member of the Maynard Legion and Lions Club, Volunteer Fire fighter, and served on many Boards. Survivors include his wife Marilyn of Clara City, his children: Pam (and Tony) March of Lake Summerset, Illinois, Jeff (and Barb) of Maynard, Nancy (and Clint) Nielsen of Clara City, Kristi (and Brian) Hilbrands of Clara City; grandchildren: Cory, Ashley, Cody, Austin and Samuel; his sister-in-law: Betty Tepfer of Danube; many nieces, nephews, and other relatives and friends. He was preceded in death by his parents, and his brothers Orville and Gordon, and sister Eurdine Grove; brother-in-law James Grove, sister-in-law Betty Tepfer.

Russell John Tepfer, the son of Albert and Esther (Gens) Tepfer, was born on September 4, 1936 in Danube, Minnesota. He was baptized and confirmed at the St. Matthew&#8217;s Lutheran Church in Danube. He graduated from Danube High School in... View Obituary & Service Information

The family of Russell Tepfer created this Life Tributes page to make it easy to share your memories.

Send flowers to the Tepfer family.