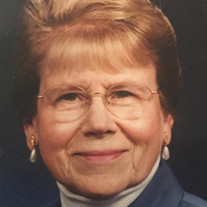 Rose Ella Evangeline (Budd) Dahl was born on December 3, 1919, in Montevideo, MN the daughter of Windom and Lydia (Tweeter) Budd. She was baptized in the Lutheran faith and graduated from Montevideo Public Schools in 1937. She then attended teacher normal training in Montevideo and taught country school near Watson, MN. Rose then attended and graduated from Mankato State Teacher’s College and taught in several schools in southern Minnesota before settling in Granite Falls, where she taught elementary school from 1948 – 1954 and again from 1967 – 1985. She also continued her education at Southwest State University from 1968 to 1970. Rose was united in marriage to Ozzie Dahl on June 1, 1953 in Montevideo, and they made their home in Granite Falls. Ozzie was employed by Mooney Construction Company as an office manager and passed away in May of 1994. Rose was an active member of Granite Falls Lutheran Church where she taught Sunday school during the time her children were growing up. She was also active in several community aspects until moving to Pillager, MN in June of 2015 and became a resident of Riverside Assisted Living. On Friday afternoon, October 20, 2017, Rose passed away unexpectedly in Staples, MN, during a doctor’s visit. She was 97 years of age. She is survived by her children- Barbara (& David) Hoff of Baxter, MN and Richard (& Shirene) Dahl of Eagan, MN; grandchildren- Nathan and Lexi Hoff and their children A’Lerika and Zander Koneval of Castle Rock, CO; Kelsey Hoff of Brainerd, MN, Kyra Dahl of Madison, WI and Darius & Lucas Dahl of Eagan, MN; her sister- Margaret Deitz of Mankato, MN and numerous nieces, nephews and extended family. Preceding Rose in death were her parents, her husband Ozzie and a granddaughter Allison Hoff.

Rose Ella Evangeline (Budd) Dahl was born on December 3, 1919, in Montevideo, MN the daughter of Windom and Lydia (Tweeter) Budd. She was baptized in the Lutheran faith and graduated from Montevideo Public Schools in 1937. She then attended... View Obituary & Service Information

The family of Rose Dahl created this Life Tributes page to make it easy to share your memories.

Send flowers to the Dahl family.