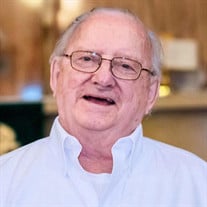 Ronald “Ron” Thompson, age 87, of Montevideo passed away on Friday, November 6, 2020 at CCM Health Hospital in Montevideo. A Mass of Christian Burial will be held on Tuesday, November 10, 2020 at 10:30 a.m. at St. Joseph’s Catholic Church in Montevideo with burial following in Sunset Memorial Cemetery. A video of the service is available on the funeral home website. Ronald George Thompson was born on January 16, 1933, in Neche, North Dakota, the son of Alex and Jessie (Clausen) Thompson. He attended school in Neche and on June 4, 1953, he was inducted in the United States Army during the Korean Conflict. Ron was honorably discharge on May 2, 1955. Ron met Priscilla Longtin before leaving to serve our country and then wrote her while he was overseas. Upon his return, they continued to grow closer and were married on October 26, 1955 at St. Joseph’s Catholic Church in LeRoy, North Dakota. The couple made their home in Walhalla, North Dakota where Ron worked for the Farmer’s Union Oil Company, it was while working there that he was transferred to different places, which included Ellendale, North Dakota, Sleepy Eye, and Cloquet. He worked shortly for Schwan’s before making one last move in 1973, when Ron took the job as a Propane Manager for Cenex in Montevideo. Ron was a member of the Montevideo VFW and a faithful member of St. Joseph’s Catholic Church in Montevideo where he served on the church board and enjoyed singing in the choir for years. In retirement, he found his true calling, driving school bus for Clark’s Transportation. Above everything else, Ron was a family man. His love and deep pride of each member was evident when he spoke their names. Ron would do anything for you. He loved yard work and wanted it to look just so, working hours with his summer flowers and then in the winter, he’d take great care in hanging Christmas lights to celebrate the season. Ron enjoyed many trips to Branson and Nashville with his wife. It may be a surprise to some, but he was a good cook and a particular painter. Ronald is survived by his children, Catherine (Sariah) Thompson of Grand Prairie, Alberta, Mary (Thomas) Tyman of Cloquet, Dean (Shirley) Thompson of Esko, David Thompson of Clara City, Dale (Angie) Thompson of Cloquet, Stacy (Craig) Olson of Montevideo; grandchildren, Lisa (Brock) Carlson, Bradley (Misty) Tyman, Erik (Heidi) Thompson, Michael (Lori) Thompson, Jerod Thompson, Jordan (Linda) Thompson, Tyler (Lexi) Thompson, Stephanie (Marty) Pankonen, Darris (Megan) Olson, Emily (Jaxton) Olson; great grandchildren, Tristan, Gavin and Annika Carlson, Brayden and Zachary Tyman, Meghan, Bailey, Parker and Easton Thompson, Cameron and Kaleigh Thompson, Avya Thompson; brothers, Frank (Jo) Thompson of Park Rapids, Richard (Sherry) Thompson of North Plains, OR, Terry (Vera) Abrams of British Columbia, Canada; sisters, Gloria McGrath of Sequim, WA, Lois Menke of Grand Forks, ND; brothers and sisters-in-law, Clair (Susie) Longtin of Cavalier, ND, Lonnie (Gerri) Longtin of Walhalla, ND, Martha Hoffarth of Marshfield, WI; as well as nieces, nephews, other relatives and friends. Ronald is preceded in death by his wife, Priscilla; parents, Alex and Jessie Thompson; brothers, Jim Thompson, Russell Thompson. In lieu of flowers, please consider a donation to the things Ron enjoyed, St. Joseph’s Catholic Church and the Montevideo VFW.

The family of Ronald "Ron" Thompson created this Life Tributes page to make it easy to share your memories.

Ronald “Ron” Thompson, age 87, of Montevideo passed away on Friday,...