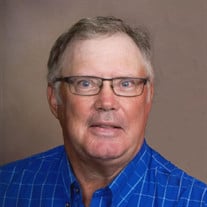 Rodney Rand, age 65, of Maynard, Minnesota passed away on Monday, November 8, 2021 at his home. Memorial Services will be held at Immanuel Lutheran Church in Clara City on Saturday, November 13, 2021 at 11:00 AM. Visitation will be two hours prior to the service at the church. Rodney Alvin Rand was born on August 13, 1956, in Granite Falls, Minnesota. He was the son of Fred and Gertie (Stegeman) Rand. Rodney was baptized and confirmed at Immanuel Lutheran Church in Clara City. He attended school in Maynard and to his teachers’ dismay, he would often speak low German with his twin brother during school. Rod graduated from Maynard High School with the Class of 1974. On September 11, 1982, Rodney was united in marriage to Patricia Pollock at St. Therese Catholic Church in Sioux Falls, South Dakota. The couple made their home of the farm homestead. They were blessed with three children, Mandy, Derek and Dalsie. Rod’s life revolved around his family and farm. Many family memories were made walking the bean fields with his wife, children, twin brother and his family, coaxing them into “another round.” Rod and his twin brother farmed together and were often mistaken for the other and would secretly enjoy watching others figure out their identity. He enjoyed gardening, snowmobiling and 4-wheeling around the farm “checking” things. Rod was a master at fixing anything with the trusted duct tape. He was always on the hunt for a good deal and you would often hear him say, “that’s good enough.” He loved dancing with his favorite jitter bug dancing partner, Patty. When his grandchildren entered his life, he loved having them around and would take them in the golf cart to Bob’s house to raid the candy dish. Rodney is survived by his loving wife, Patty Rand of Maynard; children, Mandy (Kyle) Schoborg of St. Joseph, Derek Rand of Maynard, Dalsie Rand of Maynard; grandchildren, Audrina Knoop, Maverick Schoborg; twin brother, Robert (Patsy) Rand of Maynard; sisters-in-law, Phyllis Rand of Maynard; Deb (John) Peters of Sioux Falls, Laurie (Scott) Markley of Sioux Falls, Lori Ann Pollock of Sioux Falls, SD, Debbie (Jim) Roach of Bakersfield, CA; nieces and nephews, Kristi (Tyler) Zemke, Keith (Sarah) Rand, Cassie (Andrew) Nielson, Chad Rand, Cody (Trista) Rand, Benu Peters, Jonah Peters, Steffan Peters, Skyler Peters, Alex (Danielle) Markley, Ashley Markley, Sam Markley, Monica (Travis) Stuedemann, Candice Roach, Vanessa (Matt) Guerra, Ryan Roach; as well as other relatives and friends. Rodney is preceded in death by parents, Fred and Gertie Rand; brothers, Dwayne and Ronnie Rand.

Rodney Rand, age 65, of Maynard, Minnesota passed away on Monday, November 8, 2021 at his home. Memorial Services will be held at Immanuel Lutheran Church in Clara City on Saturday, November 13, 2021 at 11:00 AM. Visitation will be two hours... View Obituary & Service Information

The family of Rodney Rand created this Life Tributes page to make it easy to share your memories.

Rodney Rand, age 65, of Maynard, Minnesota passed away on Monday,...

Send flowers to the Rand family.