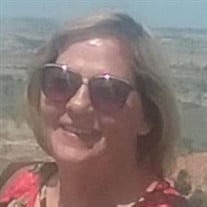 Robin Sunderland, 58, of Montevideo, passed away Monday, February 1st at her residence. A Celebration of Life will be held from 2 to 4:00 pm on Saturday June 26th at the American Legion Hall in Montevideo Robin Ridens Sunderland sadly passed away on February 1st, 2021 at home in her sleep. She was born on March, 28 1962 at Ellsworth AFB in South Dakota, before her family ended up moving to Detroit, Michigan. They finally put down roots in Montevideo, MN in 1972. In school, Robin excelled. She always enjoyed a good party with even greater friends, a social side of her that never left. During high school she worked at the Hi-Way Cafe, where she had to work after breaking her ankle at school. After graduating she attended St. Cloud State. However, she put those dreams on hold to pursue her other dream of being a mother. She married Brian Anderson and with him had 4 children. Unfortunately, one of her kids, Aaron, was stillborn, but he still held a large part of Robin’s heart. While her kids were growing up, Robin was working in Watertown, SD where she worked at Target. She worked her way up to Management and HR. Robin and Brian ended up divorcing, but it left open a spot for someone else to fill. In 2009, Robin got a job with Alco and then Shopko. With these jobs, she was able to move and travel to wild and exotic places such as North Dakota. In 2016, she moved in with her mother to help take care of her and did so until her mother passed away. During this time, Kent Sunderland managed to sneak his way into Robin’s heart and the two tied the knot on July, 28th 2018. Robin often enjoyed having multiple different “projects” around the house that she would often rope others into helping with. She also enjoyed spending time with friends and family and growing enough tomatoes and zucchini to feed a small country. In October of 2020, Robin started experiencing some health problems that took a toll on her, but she remained optimistic and looking towards recovery until the very end. She is survived by her husband Kent Sunderland, her kids Braxton Anderson, Nicholas Anderson, Brianna Anderson, and her grandkids Kayson Anderson and Jaycie Anderson. She is preceded in death by her parents Clifton and Marlene Ridens, her brothers Richard Ridens and Ronald Ridens, and her son Aaron Anderson.

Robin Sunderland, 58, of Montevideo, passed away Monday, February 1st at her residence. A Celebration of Life will be held from 2 to 4:00 pm on Saturday June 26th at the American Legion Hall in Montevideo Robin Ridens Sunderland sadly passed... View Obituary & Service Information

The family of Robin Sunderland created this Life Tributes page to make it easy to share your memories.

Send flowers to the Sunderland family.