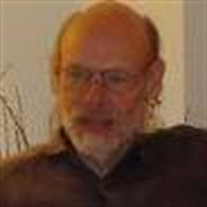 Robert Stenersen Jr, age 65, of Granite Falls, MN, passed away on Friday, October 18, 2019, at the Clara City Care Center in Clara City, Minnesota. Robert (Bob or Butchie to some) Eugene Stenersen, Jr was born November 28, 1953 at Rice Hospital in Willmar, MN. to Robert & Minnie Stenersen, Sr. Bob was baptized at Immanuel Lutheran Church in Clara City, MN and confirmed at Maynard Lutheran Church, Maynard, MN. Bob graduated from Maynard Public School in 1971. He worked at Parker Hannifin in Granite Falls from 1973 until its closing in 2000. In the last several years, he worked part time for the City of Granite Falls. In his younger years, Bob was an amateur photographer and artist until he was diagnosed with bone cancer resulting in the loss of his right arm. Being right-handed, he had to relearn many tasks we take for granted. He learned to write his name in a very acceptable script. Returning home after the surgery (showing his individualism and drive), he started building a lawn shed “single-handed” using tools given to him by a friend. Bob took pride in his independence, completing projects without assistance or fanfare. Family usually found out about his accomplishments after their completion, if he chose to share his success. He had a love for bicycles, cars, and trucks and had many great “toys”. He especially enjoyed his bike ride to Montevideo from Granite Falls three times each week. He also rode this route during the construction of Hwy 212, getting to know a few of the road crew personally giving them his “Bob-isms” on their performance and as well as their progress. His longest bike ride was round trip to Marshall and back home. He would often talk about making the 200 mile ride to Colman, SD and back, but unfortunately this was not accomplished. In early 2019, Bob again faced a diagnosis of cancer. Due to the care of the staff at the Granite Falls and St. Cloud Hospitals he was able to again beat it. Unfortunately, it took a devastating toll on his body. Due to the attentive and compassionate care at the Clara City Nursing Home he was able to spend the last few weeks comfortably. Bob will be remembered by his nieces and nephews as someone who hummed songs between sentences. He often used his own version of incorrect words in sentences. No amount of gentle reminder would sway him from doing this. When mentioning Bob’s name in conversation, those around the area knew him as the “guy on the bike”. If in your daily travels you see a bicyclist, please remember Bob. Bob leaves to celebrate his life, his brother Jerel (Terri) Stenersen, niece Allyson (Josh) Lang (their children Niklas, Kayce and Sarah), Andover, MN, niece Jennifer (partner Melissa) Stenersen, Duluth, MN, brother Lonnie (Vicky) Stenersen, Colman, SD, nephew Justin Stenersen, Sioux Falls, SD, and niece Amber (Jesse) Seas, Brookings, SD, beloved aunts Mary Freese, Geraldine Freese and several cousins. He was preceded in death by parents Robert and Minnie Stenersen, his sister Connie Schraufnagel and brother Roger Stenersen, grandparents, and several beloved aunts and uncles. A private interment will be held in the spring, when Bob would be biking again. God Bless His Memory!

The family of Robert Stenersen created this Life Tributes page to make it easy to share your memories.

Send flowers to the Stenersen family.