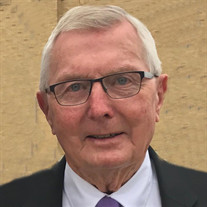 Robert “Bob/Butch” Allen Peterson passed away peacefully surrounded by his family at Rice Memorial Hospital in Willmar, MN on January 14, 2020. Bob was born April 24, 1938 in Granite Falls, MN, the eldest son of Buff and Leone (Bakke) Peterson. He was baptized and confirmed at Granite Falls Lutheran Church. Bob graduated from Granite Falls High School as a proud Kilowatt in 1956, and went on to graduate from Augustana University in Sioux Falls, SD where he played college basketball and earned a Bachelors of Arts in History in 1960. He enlisted in the U.S. Army in 1961 and was honorably discharged in 1963. Following his military service, Bob returned back to Granite Falls to begin his farming career. He initially worked alongside his father and later teamed up with his brother Doug. They grew corn and soybeans, as well as raised and tended to beef cattle year-round. Bob and Doug were well-known for their late summer sweet corn harvest that local stores and restaurants readily purchased when the crop was ripe for the picking. On January 2, 1970, Bob married Carol Bittner at Granite Falls Lutheran Church. Their son, Erik, was born in 1972, and their daughter, Grete, was born in 1984. Bob and Carol remained united in marriage until Carol’s passing in 2018. Bob will be remembered as a husband who lovingly cared for his wife in her latter years while she struggled with the effects of Alzheimer’s disease. Bob worked as a long-time high school basketball referee who officiated games throughout west central and southwest Minnesota from the late-1960’s until the mid-1980’s. He eventually hung up his whistle to spend more time watching his children participate in multiple sports. Despite the long hours spent working on the farm, he rarely missed one of their extracurricular events. In 2001, Bob retired from farming allowing he and Carol more time to travel the country to watch Grete play college softball and forge new friendships with the other softball parents. During this time, he also began his “retirement career” as a school bus driver. He enjoyed seeing Yellow Medicine East students during his twice daily bus route, and transporting the school’s athletes to sporting events throughout the area. Bob could often be found supporting the Granite Falls area at local sporting events and community social events. He was also committed to the Granite Falls Lutheran Church throughout his life while serving as a long-time usher and as the congregational president for one term, and in his later years participating in the men’s bible study. Bob will be greatly missed by his two children Erik (Carrie) Peterson and Grete (Mark) Goetz; grandchildren Brayden and Brielle Peterson, and Rocelia Goetz; brother Doug (Connie) Peterson and sisters Wanda Christensen and Kate Ashburn; and seven nieces and nephews . He will be greeted in Heaven by his wife Carol, his parents Buff and Leone, and his brother Gary. Memorial services will be held on Monday, January 20th at 11:30 am at the Granite Falls Lutheran Church. Visitation will begin at 10 am Monday at the church and continue until the time of the service. In lieu of flowers, please consider a donation to The Leukemia & Lymphoma Society. Bob stoically dealt with both leukemia and lymphoma since 2008.

The family of Robert Peterson created this Life Tributes page to make it easy to share your memories.