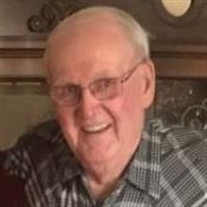 Richard “Dick” T.C. Leyse was born on March 19, 1934 in the family home in Maynard, Minnesota, the son of Oscar and Alice (Burns) Leyse. He was baptized and confirmed in the Lutheran faith. Dick lived in Maynard a few years then moved to Granite Falls where he graduated from the Granite Falls High School in 1953. Dick was united in marriage to Greta Lemke in 1955. Three children were blessed to this union. He later married Beverly Schjenken in 1975. Dick worked for Knutson Electric in Echo, Richter-Redi Mix in Granite Falls and went into business for himself and had “The Snack Bar” at the bowling alley and “Oak Grove Dairy” as a milkman. He worked at Warner’s in Sacred Heart where he retired in 1997. Dick was united in marriage to Shirley Raney in 1997. After Dick retired he drove the city bus for Granite Falls and volunteered as a bingo caller when needed. Dick was a man of great character, a sweet, kind soul with an unselfish heart. He had the time to listen and make people laugh no matter how busy it was. Dick never complained. He would lighten the atmosphere with his great humor and joke telling. Dick loved and adored his family; his siblings were his best friends. His respect for people showed. He was a GREAT man. Dick was a member of the Granite Falls Fire Department for 20 years. In 1991, he had the honor of being Ole along with his sister, Eldoris as Lena during the Ole & Lena days. Dick took great pride in being a Norwegian. He won the Good Neighbor Award in 1982. Dick received the Slinger Award with Bert Blyleven as the MC in 1996. He was a great fan of sports but mostly baseball. As a high school athlete he was known for his athleticism. His dream was to be a professional umpire for the MBL. Dick umpired and refereed many games from high school to town teams. He also enjoyed playing cards and would play any game with anyone who asked him to play. Dick is survived by his wife, Shirley; children, Paula (Curt) Soine, Richard “Rick” (Sue) Leyse, Jenny (Shorty) Henslin; grandchildren, Eric (Ashley) Soine, Heather Leyse, Megan (Dustin) Butzin; step children, Ronald Raney, Diane (Brad) Bushey, Kevin (Monica) Raney, Gwen and Julie Raney; four great grandchildren and many step grandchildren and step great grandchildren, as well as nieces, nephews, other relatives and friends. Dick was preceded in death by his parents, Oscar and Alice Leyse; sisters, Mary Jean (John) Hanson, Eldoris (Keith) Hustad; brother, Harold (Janice) Leyse; nephew, Walter Hanson; niece, Sara Leyse; stepson, Duane Raney.

Richard &#8220;Dick&#8221; T.C. Leyse was born on March 19, 1934 in the family home in Maynard, Minnesota, the son of Oscar and Alice (Burns) Leyse. He was baptized and confirmed in the Lutheran faith. Dick lived in Maynard a few years then... View Obituary & Service Information

The family of Richard Leyse created this Life Tributes page to make it easy to share your memories.

Send flowers to the Leyse family.