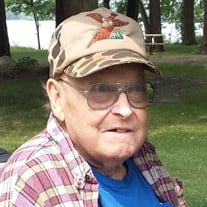 Richard Paul Laumb was born on February 9, 1937, the son of Severin and Ethel (Rear) Laumb on the family farm in rural Chippewa County. He was baptized and confirmed in his faith both at Mandt Lutheran Church in rural Montevideo. Richard graduated from the Montevideo High School with the class of 1955. He enjoyed participating in 4-H while in high school. Richard entered the U.S. Air Force on January 18, 1957, and served his country honorably until July 11, 1960. Richard was united in marriage to Joyce Best on November 13, 1965, at Elim Lutheran Church in Robbinsdale. The couple made their home on a farm in rural Montevideo where Richard helped his father farm. Richard and Joyce were blessed with three sons, Richard Jr., Robert and Randy. The couple moved to Cottonwood for a few years and then in 1977 they made Montevideo their home again. Richard began working for the State of Minnesota Department of Transportation in 1970 and retired in 1996. He enjoyed the variety of work there from mowing and plowing snow to repairing the state highways. Richard enjoyed tractors, hot rod cars, watching NASCAR Racing and guns. He liked to go fishing with his wife and when a dog was by his side, he would have a special twinkle in his eye. Richard enjoyed visiting, especially with his family and friends. Richard is survived by his wife, Joyce Laumb of Montevideo; sons, Richard Jr. (Elissa) Laumb of Montevideo, Bob (Amy) Laumb of Raymond, Randy (special friend, Judy Bendickson) Laumb of Montevideo; grandchildren, Evan Laumb, Anabeth Black, Quinton (Ashley) Liebl; great grandchildren, Grace & Klay Black, Kelbi Liebl; brothers-in-law, Bryan Best of Montevideo, Ross Best of Philippine Islands; as well as many friends and extended family. Richard was preceded in death by his parents, Severin and Ethel Laumb; numerous uncles and aunts.

Richard Paul Laumb was born on February 9, 1937, the son of Severin and Ethel (Rear) Laumb on the family farm in rural Chippewa County. He was baptized and confirmed in his faith both at Mandt Lutheran Church in rural Montevideo. Richard graduated... View Obituary & Service Information

The family of Richard Laumb created this Life Tributes page to make it easy to share your memories.

Send flowers to the Laumb family.