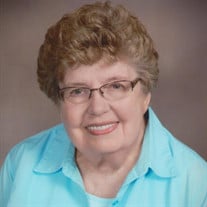 Phyllis Audrey Teichert was born October 2, 1932, the oldest of four children to Marvin and Cecil (Loland) Markgraf, in Wood Lake, Minnesota. She was baptized at St. John’s Lutheran Church and confirmed her faith there on May 12, 1946. She was crowned Homecoming Queen in 1950 and graduated as the Salutatorian of her class. After graduation, Phyllis worked at NSP in Montevideo and formed wonderful, life-long friendships. During that time, she met the love of her life, Marvin. On July 18, 1954, Phyllis married Marvin Teichert at St. John’s Lutheran Church, Wood Lake. They began married life in Olympia, Washington where Marvin was stationed in military service at Ft. Lewis. Upon his discharge, they lived south of Clara City where they farmed. Phyllis had many vegetable and flower gardens. Summers were busy weeding and canning their produce. Three children – Judy, Gary and Nancy – were born to them. While the children were growing up, Phyllis was active as a Luther League advisor, 4-H Leader and chauffeur to their many activities. Marvin passed away in October of 1987. Phyllis continued to live on the farm. She attended Willmar Community College and then decided to go to McConnell Travel School, located in downtown Minneapolis, graduating in 1990. On March 6, 2010, she moved to Clara City where she lived until her death. Phyllis was always very active at Immanuel Lutheran Church in Clara City. Besides teaching Bible School, she sang in the choir, served on the Church Council, quilted, attended Bible studies, cherished her Prayer Partners and served in many capacities in Ladies Aid. Phyllis passed away on Friday, November 9, 2018, at NC Little Hospice in Edina. She is survived by daughter Judy (Gordon) Hughes of Eden Prairie, MN, son Gary (Pamela) Teichert of Alexandria, MN and daughter Nancy Teichert of San Diego, CA, 6 grandchildren and 8 great grandchildren; one brother Lennis Markgraf of Pelican Rapids, MN and one brother-in-law Don Naaktgeboren of St. Louis Park, and numerous nieces, nephews, cousins, neighbors and friends. She was preceded in death by her husband Marvin, parents Marvin and Cecil Markgraf, sister Marlys Naaktgeboren, brother Ronald Markgraf, sisters-in-law Sharon Markgraf, Connie Markgraf, Charlotte Teichert and Anna Ulferts, brothers-in-law Clarence Teichert, Quinten Glynn, and Ben Ulferts, nephews Charles Glynn and Scott Markgraf and niece Patricia Hauser. In lieu of flowers, memorials preferred to Immanuel Lutheran Church, the American Cancer Society, the American Heart Association or charity of donor’s choice.

Phyllis Audrey Teichert was born October 2, 1932, the oldest of four children to Marvin and Cecil (Loland) Markgraf, in Wood Lake, Minnesota. She was baptized at St. John&#8217;s Lutheran Church and confirmed her faith there on May 12, 1946.... View Obituary & Service Information

The family of Phyllis Teichert created this Life Tributes page to make it easy to share your memories.

Send flowers to the Teichert family.