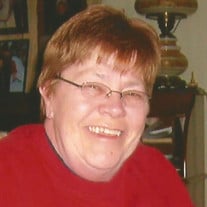 Patricia “Pat” Hansen, age 78, of Montevideo, passed away November 3, 2021 surrounded by loved ones in her daughter’s home in Le Sueur where she resided during her health decline of the last three months. Funeral services will be at 2:00 p.m. on Saturday November 13, 2021, at Our Saviors Lutheran Church in Montevideo. Visitation will be one hour prior to service time at the church. Interment will be at Terrace Lawn Cemetery in Montevideo, MN. Pat was born March 26, 1943 in Montevideo, MN to John & Bernetta (Mettling) Strommer. She was baptized and confirmed in the Catholic faith later converted to Lutheran and graduated from the Montevideo high school. Mechanically inclined, Pat enjoyed assisting her brothers in their tinkerings during her youth. Though she held several positions throughout her life, from a dental office to Mohawk restaurant, carpet sales to Barwick manufacturing; ultimately, this inclination resulted in her retirement from Chandelier Industries as Supervisor of the Deburring Department. While working her first job at the dental office, she met her husband, Myron “Mike”. They married on June 27, 1964 during a small ceremony in the chapel at Our Saviors Lutheran Church. They had two daughters from this union. Together they enjoyed doing home improvements, buying ceramic chickens, and searching for special Barbie dolls to add to her collections. Through the years she has been involved with American Legion Auxiliary and the Veterans of Foreign Wars Auxiliary. She enjoyed sewing, making quilts, and golfing on a regular basis with her sister. “I’ve got to go feed the birds,” was a common sentiment from the avid bird watcher- her binoculars never far out of reach. In the months preceding her death, feeders and flowers were erected outside the large window of her daughter’s living room so that she still had the enjoyment of their company. She is survived by her daughters: Michelle (Lauren) Mulder of Montevideo and Tracy (Lenny) Hill of Le Sueur; Grandchildren: Breanna Hill, Cassidy Hill, Benjamin Mulder (fiancés Alexis Jensen); Siblings Bill Strommer (Correne Goschey) of Montevideo and Nancy Thompson (John Anderson) of Tea South Dakota; several nieces, nephews and extended family and friends. She was preceded in death by her parents, her husband (1999), and two brothers: Robert and Jack Strommer.

Patricia &#8220;Pat&#8221; Hansen, age 78, of Montevideo, passed away November 3, 2021 surrounded by loved ones in her daughter&#8217;s home in Le Sueur where she resided during her health decline of the last three months. Funeral services will... View Obituary & Service Information

The family of Patricia Hansen created this Life Tributes page to make it easy to share your memories.

Send flowers to the Hansen family.