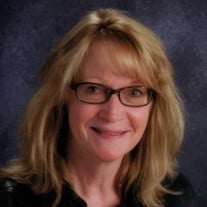 In lieu of floral arrangements, the family respectfully requests memorials. Pamela "Pam" Ann Bang was born in Montevideo, June 24, 1954, to Alfred "Sonny" and Alvina "Tootie" (Walstrom) Bang. She was baptized and confirmed at Salem Lutheran Church. She graduated from Montevideo High School in 1972. She attended Moorhead State University and earned a degree in both Spanish and Special Education. She was united in marriage to Mark Dahl on April 10, 1976 at Salem. She began her career as an educator, spending 35 years in the Montevideo School District. Over the next seven years she could not stay away from teaching. She taught at YME, the Area Learning Center, and then back at the Montevideo High School. Pam had many accomplishments throughout her career. She earned her masters degree from St. Cloud State University while working full-time and raising a family. She received the Montevideo 2009 Teacher of the Year award. She took dozens of students to Spain multiple times. But her greatest achievement of all was earning the respect and love of thousands of students over four decades. Her passion was giving her time and love. She volunteered at Circle Sentencing, dedicated time to visiting the elderly, and took great care of her growing family. She loved to dance, read books in both English and Spanish, play cards, travel, spend summers at the lake with family, and do anything under the sun with her grandkids. She lit up our world. Pam is survived by her husband, Mark; her daughter, Samantha (and Tony) Seeman; her son, Brady (and Char) Dahl; seven grandchildren, James, Brody, and Charley Seeman and Sonny, Sawyer, Marlo, and Roman Dahl; her sister, Connie (and Denny) Toftness; and several nieces and nephews. She was preceded in death by her parents, Sonny and Tootie. Blessed be her memory. Please take her in your hearts.

The family of Pamela 'Pam' Dahl created this Life Tributes page to make it easy to share your memories.

In lieu of floral arrangements, the family respectfully requests...

Send flowers to the Dahl family.