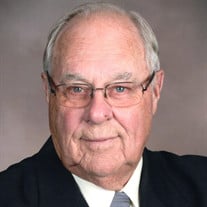 Orville Meints, 88, of Clara City, passed away on Sunday, April 17, 2022, at the St. Cloud Hospital. Funeral services will be held on Thursday, April 21, 2022, at 10:30 am at Immanuel Lutheran Church. Visitation will be held on Wednesday evening from 5 to 7 pm at Immanuel Lutheran Church in Clara City and will continue one hour prior to services on Thursday. Orville Meints was born April 2, 1934, the son of Claus & Symka (Tebben) Meints in Lone Tree Township, Chippewa County, Minnesota. He was baptized and confirmed at Bethany Reformed Church. He graduated from the Clara City High School in 1952. Orville went on to serve his country in the United States Navy where he was based at the Norfolk Naval Station and when overseas he was based out of Naples, Italy. He was a crew member of the USS Elokomin as a morris code operator. He was honorably discharged in 1956. Orville was united in marriage to Idell DeGrote on February 19, 1956, at Immanuel Lutheran Church. They moved to Worthington for a few years and then returned to Clara City. He worked for the VSC Store for a number of years and operated his own insurance company for 19 years. Orville was very active at church, serving on the Church Council as a member and President and was involved in many activities in his community. He served on the Clara City City Council and was also Mayor. Orville was also county commissioner for 12 years. During the last number of years, he was active with God’s Garden. He enjoyed fishing in his spare time and was an avid Minnesota sports fan. Orville passed away on Sunday, April 17, 2022, at the St. Cloud Hospital. He was 88 years of age. He is survived by his three children: Curt (Diane) Meints of New London; Julie (Tim) Hauser of Waconia and Nancy (Loren) Gosseling of Maynard; son-in-law Gary (Pam) Wolf of Waconia; ten grandchildren: Jamie (Jeff) Fernholz; Stacie (Nate) Rademacher; Jenny (Clint) Schwitters; Melissa (Kristi) Huegel; Ryan (Nicole) Meints; Matt (Lynn) Wolf; Josh Hauser; Megan (Neil) Oftelie, Isaac Gosseling and Andrew Gosseling; great grandchildren: Kenzie, Brooklyn & Jayce Fernholz; Alexis, Makayla & Aubrey Rademacher; Kaley, Kelsey & Connor Schwitters and Caden & Logan Meints, Silas Huegel; Zackary, Alyssa & Wyatt Welty; brother Allan Meints of Clara City; and several extended family and friends. He was preceded in death by his parents, wife Idell in 2011, daughter Kathy in 2012 and two brothers: Clifton and Kenny.

Orville Meints, 88, of Clara City, passed away on Sunday, April 17, 2022, at the St. Cloud Hospital. Funeral services will be held on Thursday, April 21, 2022, at 10:30 am at Immanuel Lutheran Church. Visitation will be held on Wednesday evening... View Obituary & Service Information

The family of Orville Meints created this Life Tributes page to make it easy to share your memories.

Orville Meints, 88, of Clara City, passed away on Sunday, April...

Send flowers to the Meints family.