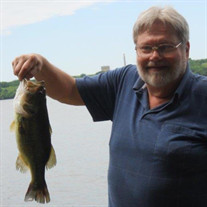 Nicholas Yoder, age 69, of Montevideo passed away Sunday, September 20, 2020 at Luther Haven Nursing Home in Montevideo. There will be no service at this time due to Covid, a Celebration of Life and Love will be plan in August of 2021. Nicholas was born August 4, 1951 in Freeport, Illinois to Wayne and Gloria (Raetz) Yoder. He grew up in Freeport and graduated from Freeport High School. Nick was united in marriage to Joan Daugirda Nelson on August 8, 1987 at Sinnissippi Park in Rockford, Illinois. The couple started their new life together in Freeport, Illinois and later moved to Rockford, Illinois to be closer to work. He loved his wife Joan and they did everything together. Nick worked as a quality engineer in Rockford, Illinois for 40 years. He made wonderful friends in those years and to this day still had relationships with them, some even came to visit in Minnesota. Nick and Joan loved their Minnesota trips and eventually moved here. They made a beautiful home in Montevideo in 2013. Nick retired in 2016, giving him more time doing what brought him the greatest joy, taking Joan and Mallee fishing and then get lunches and sit by the river to eat their lunches. Nick was one of a kind, he loved telling jokes and telling stories of all his growing up shenanigans with Dubes, his childhood friend. He enjoyed fishing, grilling, cooking, driving around the lake, going asparagus hunting, smoking sausage. He loved coming to the lake and taking golf cart rides around the resort, he would fish, grill and play games and in the early morning built a fire to have coffee while enjoying the fire. You always had to stock up on wood when you knew Nick was coming. Nick also loved his yard and flying his flag high in the sky. He could look at that for hours. Nick loved his garden, flowers and mowing. He and Joan would work in the yard for hours getting it jus right and then sit down and just gaze at how beautiful it looked. Eventually Nick would fall sick to his diabetes and kidney failure. He fought a hard fight until his body was too tired to fight anymore. The family is very thankful to the St. Cloud Hospital and Luther Haven for giving him the upmost care during his final days. Nick is survived by his loving wife, Joan Yoder of Montevideo; beloved dog, Mallee; daughter, Renee Isbell; step-daughter Elissa (Rich) Laumb; step-son, Jeffrey (Beth) Nelson; grandchildren, Quinton, Anabeth, Brittany, Summer, Tyler, Ben, Monica; great grandchildren, Grace, Kelbi, Klay, Gabriel; as well as other relatives and dear friends. Nick is preceded in death by his dad, Wayne Yoder and his mom, Gloria Yoder.

Nicholas Yoder, age 69, of Montevideo passed away Sunday, September 20, 2020 at Luther Haven Nursing Home in Montevideo. There will be no service at this time due to Covid, a Celebration of Life and Love will be plan in August of 2021. Nicholas... View Obituary & Service Information

The family of Nicholas Yoder created this Life Tributes page to make it easy to share your memories.

Send flowers to the Yoder family.