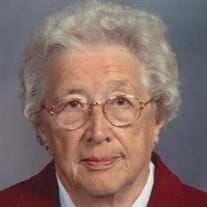 Myrtle Starbeck, 90, of Montevideo, passed away Thursday, April 30th at her residence. A private family service is planned on Wednesday May 6th with burial at Sunset Memorial Cemetery. Myrtle E. Starbeck was born July 15, 1929, the daughter of Peter & Margaret Swanberg, in Benson. She was baptized and confirmed in the Lutheran faith. She worked as a nanny for a doctor in South Dakota during her teenage years. Myrtle graduated from the Benson High School. Myrtle was united in marriage to Robert Starbeck on February 8, 1947, in Benson. They later moved to Montevideo where Myrtle went to work for First National Bank. Myrtle and Robert would follow the PGA Tour in the Winter for several months. She retired after 28 years to stay at home and help her husband during his failing health. She also volunteered at the food shelf and the American Legion. She loved to walk wherever she went, even during the Winter. Myrtle passed away on Thursday, April 30, 2020, at her residence. She was 90 years of age. She is survived by her children: Jon Starbeck of Montevideo and Douglas Starbeck of Maple Plain; son-in-law Steve Kranz of Long Lake; grandchildren: Justin Starbeck of Miami, Florida, Nathan Kranz of Minneapolis, Heather and Hunter Starbeck of Myrtle Beach, South Carolina and Dakota Starbeck of Olivia; sisters: Marcella & Darlene; brothers: Luvern and Lowell and several extended family and friends. She was preceded in death by her parents, husband, her daughter Karen Kranz, sisters: Hazel, Lois, Marie and Isabel, brothers: Howard, Robert, Floyd and Richard.

Myrtle Starbeck, 90, of Montevideo, passed away Thursday, April 30th at her residence. A private family service is planned on Wednesday May 6th with burial at Sunset Memorial Cemetery. Myrtle E. Starbeck was born July 15, 1929, the daughter... View Obituary & Service Information

The family of Myrtle Starbeck created this Life Tributes page to make it easy to share your memories.

Send flowers to the Starbeck family.