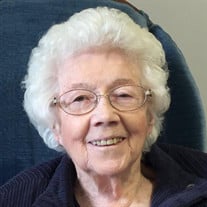 Myrtle (Coulter) Raebel died February 2, 2019, in Chippewa County, Minnesota, where she had deep family roots and lived almost all of her 92 years. Myrtle was born in a farmhouse in Stoneham Township, May 15, 1926, to Harold "Pete" and Sarah (Tebben) Coulter, she was the youngest of three children. She graduated from Maynard High School and worked for a year in St Paul, Minnesota, as a secretary-bookkeeper before marrying in 1945 U.S. Navy seaman Clifford Raebel of Granite Falls, Minnesota. Initially, they farmed in the area and raised two children. Myrtle returned to office work, first in Montevideo then in Maynard, where she and Cliff purchased their longtime home and engaged in numerous church, civic and social activities. Myrtle's family ties and community involvement, plus her work as a bookkeeper for Thorstad Construction and Impact Plastics, produced long-running friendships and fond memories. She enjoyed lively banter at card games, picnics, potlucks and parties. In retirement, she and Cliff liked touring the U.S. by car, camper and motorcoach. Myrtle is survived by children, Allan (Linda Fransen) Raebel and Linda (David) Rea; by grandchildren, Christopher (Kelly Richey) Raebel and Jennifer Raebel; by sisters-in-law, Lela Pray Coulter and Joan Raebel Hempeck; and by many nephews, nieces, great-nephews and great-nieces. Preceding her in death were husband, Cliff; brothers, Ralph and Arnold Coulter; sister-in-law, Marie Sorensen Coulter; brothers-in-law, Melvin Hempeck, and Donald, Roger and Harvey Raebel and their spouses Rosalie (Brown), Phyllis (Luebken) and Virginia (Odegard), respectively. Interment at Maynard Lutheran Cemetery and remembrance will be set at a future date. Memorial gifts may be made to Maynard Museum or other local charity or to Maynard Lutheran Church Auxiliary.

Myrtle (Coulter) Raebel died February 2, 2019, in Chippewa County, Minnesota, where she had deep family roots and lived almost all of her 92 years. Myrtle was born in a farmhouse in Stoneham Township, May 15, 1926, to Harold "Pete" and Sarah... View Obituary & Service Information

The family of Myrtle Raebel created this Life Tributes page to make it easy to share your memories.

Send flowers to the Raebel family.