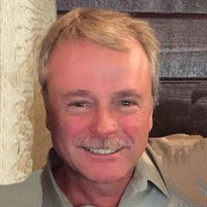 Mitch Steele, age 59, of Otsego passed away on Wednesday, November 24, 2021. A Private Family Service will be held at First Congregational Church in Glencoe, Minnesota. Live Stream will be available on the church Facebook page and will be available there for 2 weeks. Interment at a later date in Wisconsin next to his father. William Mitchell Steele was born on March 31, 1962, in Boscobel, Wisconsin. He was the son of William and Beverly (Jones) Steele. Although William was his given name, he was known all his life as “Mitch.” He attended Sioux Trail Elementary and Metcalf Junior High School before graduating from Burnsville High School with the Class of 1981. After high school, Mitch went to Red Wing Vocational school to obtain a HVAC degree and later transferred to Eden Prairie to complete it. In 1996, Mitch went to a small-town celebration and by chance met Shirley Schwartz. A year later they moved in together in 1997 and on January 1, 2005 they were married at First Congregational Church in Glencoe. Mitch began working at Arlington Good Samaritan and then at Plato Woodworks in the maintenance departments. After working for an electrician in Arlington, he decided to go back to school to earn his electrician degree. Upon completion, he went to work Seneca Foods in Glencoe, eventually became a Master Electrician. In 2016, Mitch and Shirley moved to Otsego where he worked at Medical Extrusion Technologies and most recently Delta ModTech for the past 2 years. Mitch will be remembered for his big heart. He would help anyone with anything. Mitch loved fishing, camping, bonfires, lounging in the pool and spending time in his shop, working on his many projects. He knew a little about everything and probably had a tool for it as well. When they moved to Otsego, the neighbors became family and Mitch loved to be able to lend a helping hand. Mitch loved a good laugh and the twinkle in his eye showed the humor and fun-loving spirit. His strong faith in God and love for life helped shape him into the person he became. His influence will forever remain in the lives of all that knew him. Mitch passed away on November 24, 2021 at the Mercy Hospital after a 3-week battle with Covid 19. Mitch is survived by his loving wife, Shirley Steele of Otsego; daughter, Sheston Steele; step son Tyler Schwartz; mother, Beverly Ward; siblings, Sherrie (Curt MacFarlane) Steele, Brenda (Dave) Norberg, Shelly (Dane) Meyer, Sheila (Joe) Kaler; step brother, Clark Jr. (Sheryl) Ward; step sisters, Sue (Jack) Arvig, Sandy (Terry) Flategraff, Patty (Ken) Rolston; 27 nieces and nephews; 40 great nieces and nephews; as well as other relatives and friends. Mitch is preceded in death by father, William Steele; step father, Clark Ward; infant brother, Willard William Steele; niece, Amanda Cummins; great niece, Lilian Cummins; grandparents, William and Alice Steele, Willard and Elva Jones.

Mitch Steele, age 59, of Otsego passed away on Wednesday, November 24, 2021. A Private Family Service will be held at First Congregational Church in Glencoe, Minnesota. Live Stream will be available on the church Facebook page and will be... View Obituary & Service Information

Service is being postponed. Please check back for updates.

Mitch Steele, age 59, of Otsego passed away on Wednesday, November...

Send flowers to the Steele family.