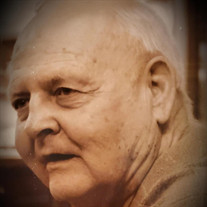 Milo Lindquist, 88, passed away peacefully on Saturday, December 5, 2020, at the Granite Falls Manor and Care Center due to complications from COVID-19 and terminal cancer. A memorial service will be held Saturday, August 14th at 2:00 pm at Hawk Creek Lutheran Church. Visitation will be held one hour prior to services. The family requests no flowers be sent, a memorial may be given to the charity of your choice. Milo was born on October 14, 1932 to Carl Samuel Lindquist and Tilda Paulene Berg. He was baptized and confirmed at Hawk Creek Lutheran Church, and was a graduate of Granite Falls High School. On September 4, 1954, Milo was united in marriage to his loving wife, Norma Jean (Reese) at the Hawk Creek Lutheran Church. The couple eventually settled on the family farm near the Minnesota Falls co-op elevator. He was a lifelong farmer, raising corn, wheat, and beans. He was well known for his clean fields and meticulously straight crop rows, long before the days of GPS . He worked part-time for Skyway Ag Service in Sacred Heart after retirement, and also ran his own water hauling business for local farms. Milo loved spending time with his children and grandchildren. He is fondly remembered for attending numerous sporting events and concerts; hauling seed corn in his 1948 Chevy pick-up truck; going on family trips; pushing everyone on the backyard swing; taking the grandkids on adventures down to Hawk Creek in the back of his baby blue 1981 Ford Courier; watching old movies, history shows, and cartoons such as Courage the Cowardly Dog; having Spam every day for dinner; and teaching everyone “colorful” phrases in Norwegian. He loved opening Christmas presents, even though he said he never wanted any. He was a kind man with a heart of gold and a wonderful sense of humor. He will be forever missed by his loving family. Milo is survived by his wife of 66 years, Norma, of Granite Falls; daughter Lisa (Joe) Bruflat of Olivia, MN; daughter Sandra (Terry) Sullivan of Bloomington, MN; son Paul of Brainerd, MN; grandchildren Amber Anderson, Michael Sullivan, Taylor Bruflat, Kenzie (Oakly) Zink, Justin Sullivan, and Jesamine Sorenson; brother Stanton Lindquist of Jenison, MI; and by numerous nieces and nephews. He was preceded in death by his parents, Carl “Sam” and Tilda; brother Carroll Lindquist; sisters Elsie Ellingboe and Jane Johnson; and beloved pets Nipper, Lassie, Penny, Bandit, and Heidi Lou. A memorial gathering will be held at a later time when we can all come together to celebrate his life. The family would like to thank the amazing staff at the Granite Falls Manor for the wonderful care that Milo received during his stay there over the past several years. Arrangements made by Wing-Bain Funeral Home of Granite Falls, MN

Milo Lindquist, 88, passed away peacefully on Saturday, December 5, 2020, at the Granite Falls Manor and Care Center due to complications from COVID-19 and terminal cancer. A memorial service will be held Saturday, August 14th at 2:00 pm at... View Obituary & Service Information

The family of Milo Lindquist created this Life Tributes page to make it easy to share your memories.

Send flowers to the Lindquist family.