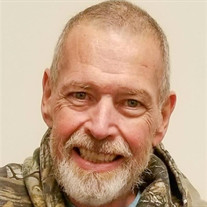 Michael Alan MaKarrall, age 59, passed away peacefully at his home in Granite Falls, MN on January 30, 2018 surrounded by his loved ones. Mike was born in Hibbing, MN on May 21, 1958 to Ronald R. MaKarrall Sr. and Vivian J (Westerlund), the fourth of five children. His family moved from Hibbing to St. Cloud, MN in 1963 and Mike graduated from Tech High School in 1976. On August 11, 1979, Mike married his soulmate Denise M (Eberhardt) in St. Cloud, and they had 4 beautiful children together. Mike returned to school in 1992 and earned his certificate in Water/Waste Water Treatment and Technology. Mike and his family moved to Clarkfield, MN in 1994 where Mike worked for the city as a maintenance technician. In 1997, Mike began working at the Granite Falls water plant as an operator and in 1998 they moved to Granite Falls, MN. Mike was a good friend of Bill W for over 30 years. He was such an inspiration to others, proving with actions and his words that working a program works. Mike also volunteered for Yellow Medicine County Restorative Justice program for over 7 years. He was passionate about the RJ program and truly generous with his time; even opening his home to many that were in need. Mike was an avid hunter and recruited many of his friends to join him at what became “Camp Henry” in the Paul Bunyan State Forest every deer season. He also loved to fish, go 4 wheeling, and root for the MN Twins and Vikings (SKOL!). Mike is survived by his wife, Denise; his son, Tim (Tina) MaKarrall and their sons; Atreyu and Seamus; his son, Brad (Sara) MaKarrall and their daughters; Kallie and Leah; his son, Jeff (Angie) MaKarrall and their sons; Donte and “Jones” – due in May, 2018; his daughter, Gina (Dave) Benson and their children; AJ, Aubry, and Kiara; his son of his heart, John (Casey Schram) and their children; Kalie, Raven, Cynthia. His mother, Vivian; his brothers, Steve (Jean) MaKarrall, Ron (Kathy) MaKarrall, his sister Doreen (Bill) Strawsburg; and many nieces and nephews. He was preceded in death by his father Ronald MaKarrall Sr.; his sister, Denise Henry; his brother-in-law, Michael Henry; several aunts and uncles; his in-laws, Kenneth and Rosemary Eberhardt and their sons, Wayne, Brian, and Gary. There will be a celebration of Mike’s life at Wing Bain Funeral Home in Granite Falls, MN on February 1, 2018 at 5pm. Mike requested that in lieu of flowers, people would please consider a donation to the Yellow Medicine County Restorative Justice Program, 415 9th Ave, Suite 107, Granite Falls, MN 56241. Mike’s wish was to be cremated and have his ashes spread among the trees near his favorite hunting spot; which will take place at a later date. “That man is a success – who leaves the world better than he found it; who has never lacked appreciation of earth’s beauty or failed to express it; who looked for the best in others and gave the best he had.”

Michael Alan MaKarrall, age 59, passed away peacefully at his home in Granite Falls, MN on January 30, 2018 surrounded by his loved ones. Mike was born in Hibbing, MN on May 21, 1958 to Ronald R. MaKarrall Sr. and Vivian J (Westerlund), the... View Obituary & Service Information

The family of Michael MaKarrall created this Life Tributes page to make it easy to share your memories.

Michael Alan MaKarrall, age 59, passed away peacefully at his...

Send flowers to the MaKarrall family.