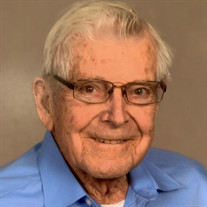 Merlyn Ast, 91, of Maynard, passed away on Friday, December 11th at his residence. A Celebration of Life will be held Saturday June 5th at 10:30am at Maynard Lutheran Church. Burial and Military Honors will be held in the church cemetery. A luncheon will follow at the Maynard Community Center. As a family we have wondered for years if this might be “the last time…” we would see our beloved Husband, Father, and Grandfather Merlyn Ast; but he has always found a way to rally. So when his wife and four girls gathered at his bedside on the Maynard family farm, he was still humoring us with one-liners, and we were wondering if he might again find a way to rally. One of his signature sayings was “pertnear”, and we didn’t know that he was “pertnear” there; but at 1:40 AM on December 11th, Merlyn gently passed from this life. His family held hands at his bedside and prayed him into the arms of Jesus for eternity. It was a beautiful way to end a blessed life. Merlyn Charles Ast was born in Lake Wilson, Minnesota on June 16, 1929 to Charles and Myrtle Ast. Merlyn liked to celebrate his birthdays – often on Father’s Day – with large gatherings of friends and family. He had five siblings – Donna (and Jerry Fjellin), Shirley (and Tom Downing), Robert Ast (Bob & Doris), and the twins Diane Lewis (and Gary) and David Ast. Merlyn married Jackie Vos in Slayton, MN on March 23, 1957 and they were blessed with four daughters – Robin (& Keith Beito), Mary Beth (& Joe Gagner), Michelle (Mickey & Kevin Gerdes), and Melanie. They adopted their 2-year old son Don in 1967. These four girls and their spouses provided seven grandsons and one granddaughter, as well as 13 great-grandchildren. In 1962, Merlyn and Jackie moved their young and growing family to the farm south of Maynard where they still reside. Merlyn farmed, milked cows, and raised hogs before venturing into work at Ready Mix and many years as concrete foreman for Thorstad Construction. He raised sheep and there were many Christmas gatherings when he was feeding bottle lambs. Fishing was a favorite pastime of Merlyn’s – as a young boy on Lake Shetek, catching bullheads with his 4 daughters, and establishing a tradition of winning the pot of money from the up-north spear-fishing crew that included his son, sons-in-law, grandsons, and friends. Merlyn was a proud Veteran of both the Air Force, where he served overseas, and the Army as a Corporal. He wore his VFW uniform with pride; serving with the Granite Falls Honor Guard for funerals of local veterans. Merlyn was also active with the Maynard Lions and Maynard Lutheran Church – often involved in building projects. He left a legacy of many newly planted trees in the Maynard area. Merlyn was preceded in death by his parents Charles and Myrtle, sisters Donna and Shirley,brother David, son Don and great grandson Odin Gagner. We will have a celebration of Merlyn’s life when all his family and friends can assemble to safely share hugs and laughter. If you plan to attend, be prepared for an extended service as he has picked out many of his favorite old hymns to have sung. Though Merlyn’s heart stopped beating on December 11th, it continues to spread love. We feel that love as his wife, daughters, siblings, sons-in-law, grandchildren, and friends who have been impacted by the life of Merlyn Ast.

Merlyn Ast, 91, of Maynard, passed away on Friday, December 11th at his residence. A Celebration of Life will be held Saturday June 5th at 10:30am at Maynard Lutheran Church. Burial and Military Honors will be held in the church cemetery.... View Obituary & Service Information

The family of Merlyn Ast created this Life Tributes page to make it easy to share your memories.

Send flowers to the Ast family.