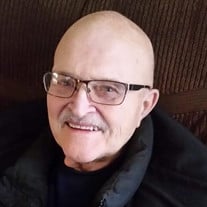 Merle Warren Hammer was born on November 14, 1947 in Granite Falls, the son of Marvin and Hazel (Bottcher) Hammer. He was baptized and confirmed in his faith at St. Paul Lutheran Church. Merle grew up in Granite Falls and graduated in 1965 from Granite Falls High School. He furthered his education at the Granite Falls Vocational Technical School earning a 2 year degree in Fluid Power. He then served his country in the United States Army for 2 years, from 1967-1969. He served in Bamburg, Germany. Merle was united in marriage on March 14, 1970 to Mary Schei at Trinity Lutheran Church in Montevideo. Merle and Mary made their home in Granite Falls and were blessed with three children, Gina, Molly, and Jonathan. Merle and his brother Jerry, worked together in the family business began by their father, Marvin. “Hammers” was a plumbing, heating, air conditioning and refrigeration business. He retired in 2015. He enjoyed serving the community and was on the Granite Falls Rescue Squad for over 31 years. He also served for 39 years as a Firearms Safety Instructor. He also worked as a Committee Member of the local Duck’s Unlimited for 10 years. He was a proud lifelong member of the National Rifle Association and a member of the American Legion, Post 0069. Merle was lifelong member of St. Paul Lutheran Church, helping out where he could. He worked on building the church with his dad Marvin and brother Jerry while in high school. He loved the outdoors. He enjoyed hunting, fishing, camping and riding motorcycle. He could fix anything that was broken! Such a talented man! He also had a story for anyone, for every occasion. Some of these were lengthy, and you’d wonder how long they could go on, but they always ended leaving you with a smile and a chuckle! Merle is survived by his wife, Mary of Granite Falls. Children: Gina (John) Christopherson of Kensington, MN; Molly (Jason) Hoff of Granite Falls; Jonathan (Stacie) Hammer of Rochester, MN. Grandchildren: Khrystyna LeBrun, Nathan LeBrun, Casey Christopherson, Nicholas Christopherson, Sean Christopherson, Logan Hoff, Riley Hoff, Matilda Hammer and Amelia Hammer. Siblings: Jean Schultz of Montevideo and Jerald (Nancy) Hammer of Granite Falls; Sisters-in-law: Barbara (Larry) Smith of Montevideo and Sue (Brad) Dyshaw of Montevideo. Also, aunt Isabel Kloss of Hopkins, Minnesota, as well as many special nieces, nephews, cousins, and friends. Merle is preceded in death by his parents, Marvin and Hazel Hammer; his step-father, Monroe Rachie; and his brother-in-law, Floyd Schultz, along with many aunts and uncles and extended family, awaiting him in Heaven. What a glorious reunion!

Merle Warren Hammer was born on November 14, 1947 in Granite Falls, the son of Marvin and Hazel (Bottcher) Hammer. He was baptized and confirmed in his faith at St. Paul Lutheran Church. Merle grew up in Granite Falls and graduated in 1965 from... View Obituary & Service Information

The family of Merle Hammer created this Life Tributes page to make it easy to share your memories.

Send flowers to the Hammer family.