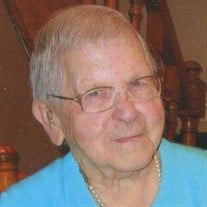 Mary Charlotte Macziewski was born on March 18, 1930 in Mandt Township, Chippewa County, MN, the daughter of Erick and Amolia Hilmey. She was Baptized and Confirmed in the Lutheran faith. Mary attended country school and graduated from the Milan High School. Mary was united in marriage to Richard Macziewski on March 25, 1952, at Mandt Lutheran Church north of Montevideo, Minnesota. She lived on the family homestead farm most of their married life and retired on Lobster Lake after building a new home there. Mary was a faithful member of Trinity Lutheran Church of Havelock Township. She was Superintendent of Sunday School for several years. Mary worked at Johnny’s Grocery Store in Montevideo. Mary was a very active parent supporting the needs of their four children as well as setting a good example which included being a hard worker with good work ethics, morals, and values. She enjoyed spending time with her family, grandchildren, and great grandchildren. Mary had a great sense of humor and enjoyed living at Brookside Manor Senior Living. Mary was very active in instigating many activities and encouraging new comers to feel welcome and become a part of the Brookside family. On Wednesday, October 9th, 2019, Mary was called home. She was 89 years of age. Surviving family include her children Gary Macziewski, Susan (Stan) Kleinhuizen of Alexandria, MN, Rick (Sandra) Macziewski of Montevideo, eight grandchildren and 13 great grandchildren, two sisters Esther Jensen of New Ulm and Adeline Thompson of Glendale, Arizona. She was preceded in death by her parents, son Steven Macziewski 2010, husband Richard 2010, brother Oliver Himley, sister Bernetta Martin, and great granddaughter Lauren Meyer. Funeral service will be held Saturday, October 12, 2019 at 1:00 PM at St. Paul’s Lutheran Church in Montevideo. Interment will follow in Terrace Lawn Memory Gardens Cemetery. Visitation will be held Friday, October 11, 2019 from 5:00 – 7:00 PM at Wing-Bain Funeral Home in Montevideo and will continue one hour prior to services at the church.

Mary Charlotte Macziewski was born on March 18, 1930 in Mandt Township, Chippewa County, MN, the daughter of Erick and Amolia Hilmey. She was Baptized and Confirmed in the Lutheran faith. Mary attended country school and graduated from the... View Obituary & Service Information

The family of Mary Macziewski created this Life Tributes page to make it easy to share your memories.

Send flowers to the Macziewski family.