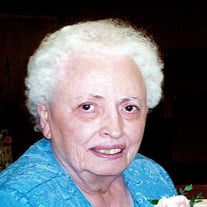 Martha Mae Ellingboe was born April 3, 1925, in Swift County, Minnesota, to Albert and Mary (Chalupnik) Schulz. She was baptized and later confirmed in her faith at the Maynard Lutheran Church. Martha grew up on the family farm near Benson until her family moved to rural Maynard in 1938. Martha then attended school in Maynard, enjoyed participating in singing competitions and won an award for singing “Going Home.” She graduated with honors as valedictorian with the Class of 1943 from Maynard High School. On September 18, 1948, Martha was united in marriage to Archie Ellingboe at Maynard Lutheran Church. The couple made their home on a farm in rural Maynard and were blessed with two sons, Harold and Richard. Martha was a loving farmwife and mother. She enjoyed farming with her family. Many summers were spent in the bean fields keeping them clean as her father instilled in her; all the while maintaining the home and organizing meals for those that came to help. Martha was a faithful member of Maynard Lutheran Church where she served on the Ladies Aid committees. Martha was hardworking, coming from a generation where their work was also their hobby. She enjoyed cooking, baking, sewing and embroidery, making many tea towels through the years. Martha had a dream of building a home and she accomplished her dream with her husband in 1972, when they moved into the new house on the Ellingboe family farm. After making the Clara City Care Center her home, Martha especially enjoyed visiting with those she loved and asking them of the happenings on the farm. Martha is survived by her sons, Harold (Cindy) Ellingboe of Maynard, Richard (Linda) Ellingboe of Maynard; granddaughter, Marie Anderson of Maynard; sister, Mildred (Robert) Snook of Lincoln, CA; as well as nieces, nephews, other relatives and friends. Martha is preceded in death by her parents, Albert and Mary Schulz; husband, Archie; sister-in-law Lillie (Lawrence) Bluml.

Martha Mae Ellingboe was born April 3, 1925, in Swift County, Minnesota, to Albert and Mary (Chalupnik) Schulz. She was baptized and later confirmed in her faith at the Maynard Lutheran Church. Martha grew up on the family farm near Benson... View Obituary & Service Information

The family of Martha Ellingboe created this Life Tributes page to make it easy to share your memories.

Send flowers to the Ellingboe family.