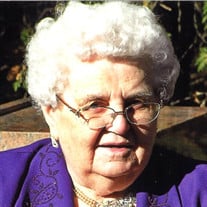 Marian Andresen, age 99, of Clara City passed away on Saturday, June 13, 2020 at the Clara City Care Center. Funeral services will be held Wednesday, June 17, 2020 at 10:30 AM at Bethany Reformed Church in Clara City with burial following in the church cemetery. Visitation will be held one hour prior to the service at the church. Marian Eleanor (Aalfs) Andresen was born on April 28, 1921 in Crate Township, rural Clara City. She was the daughter of Herman Sr. and Dena (Hayunga) Aalfs. Marian was baptized as an infant and later confirmed in her faith at Bethany Reformed Church in Clara City. Marian attended country school, District #47, until the 8th grade. On March 27, 1941, Marian was united in marriage to Egbert Andresen. This union was blessed with three sons, Ronald, Marlyn and Jerrell. They lived and farmed for 40 years in Rheiderland Township until moving to their new home in Clara City in 1979. Marian worked at the Bunte Candy Factory in Chicago, Illinois while Egbert was in the Army during World War II. Marian was a housewife and mother. She was a Sunday School teacher and active in the Ladies’ Circle at Bethany Reformed Church. Marian enjoyed sewing, crocheting, and doing word searches. Each of her grandchildren received a crocheted baby blanket, afghan and a set of embroidered dish towels. Most of all, Marian cherished the time she could spend with her children, grandchildren and great grandchildren. Marian went to be with her Lord on June 13, 2020 at the age of 99 years, 1 month and 5 days. She was a woman of great faith and we will miss her dearly. Marian is survived by her three children, Ronald (Barbara) Andresen of Litchfield, Marlyn (Erma) Andresen of Clara City, Jerrell (Colleen) Andresen of Clara City; sister-in-law, Muriel Vestal of Clara City; 9 grandchildren and 23 great grandchildren. Marian is preceded in death by her parents, Herman and Dena Aalfs, her husband, Egbert in 1996; an infant grandson, Derek; sister, Margaret Sweep; brothers, Bert, Herman Jr. and Virgil.

Marian Andresen, age 99, of Clara City passed away on Saturday, June 13, 2020 at the Clara City Care Center. Funeral services will be held Wednesday, June 17, 2020 at 10:30 AM at Bethany Reformed Church in Clara City with burial following in... View Obituary & Service Information

The family of Marian Andresen created this Life Tributes page to make it easy to share your memories.

Marian Andresen, age 99, of Clara City passed away on Saturday,...

Send flowers to the Andresen family.