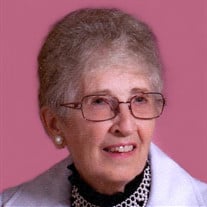 Marcella Lois DeJong was called to her heavenly home on Thursday, March 22, 2018 at the age of 83. She passed away peacefully at the Granite Falls Hospital. Marcella ("Marcie") was born on March 31, 1934 in Montevideo, MN, the daughter of Julius and Evelyn (Lasher) Olson. She was baptized and confirmed in the Lutheran faith at Our Saviors Lutheran Church in Montevideo. She attended elementary school in Minneapolis and Granite Falls, and finished out her schooling at Granite Falls High School, graduating in 1952. On August 20, 1954, Marcie was united in marriage to James Edwin DeJong in Worthington, MN. They made their home near Slayton, MN, where they were blessed with a daughter. From there, they moved to Sheldon, IA, where they were blessed with two sons. Moving on to Sumas, WA, they owned and operated a dairy farm for ten years and were blessed with another daughter. James was diagnosed with cancer in 1972, prompting them to move to Granite Falls to be closer to Marcie's family. This is where she started her sewing business and served the community with her talent for seventeen years. She did everything from alterations to sewing complete clothing items and wedding gowns. In 1988, she took on a job at the Granite Falls Hospital in the dietary department, working there for three years. After that, she was a coffee server at Firefly Creek Casino for three and a half years, retiring in 1994. Marcie was a loving wife, mother, and grandmother. She loved spending time with family and friends. She enjoyed her flower gardens, crocheting, needlework, quilting, and puzzles, but walking many miles all over town was her favorite pastime! She was strong in her faith and attended church every Sunday. Marcie is survived by her daughters Elizabeth DeJong of Oak Ridge, TN, and Jodi (Donnie) Trotter of Granite Falls; grandchildren Tracy Brown and Tonya Smith (and their families) of TN, and James Trotter and Kayla Trotter of Granite Falls; sister Josephine Geerdes of Elfrida, AZ; brothers Edward (Mary) Olson of Glenwood, MN, and Lawrence (Karen) Olson of Lebanon, MO; brothers-in-law Maurice Bredeson of Granite Falls and Jay Flickinger of Diamond City, AR; and many nephews, nieces and extended family. She was preceded in death by her husband James DeJong; sons Dean DeJong and Mark DeJong; parents Julius and Evelyn Olson; sisters Julia Bredeson, Helen Flickinger, and Benita Olson (in infancy); father-in-law and mother-in-law Joe and Elizabeth DeJong; step mother-in-law Nettie DeJong; brothers-in-law Gerard DeJong, Arthur DeJong, and George Geerdes; sisters-in-law Geneva Bennett and Cornelia Osterkamp; nephew John Geerdes; and niece Cathy Flickinger.

Marcella Lois DeJong was called to her heavenly home on Thursday, March 22, 2018 at the age of 83. She passed away peacefully at the Granite Falls Hospital. Marcella ("Marcie") was born on March 31, 1934 in Montevideo, MN, the daughter of Julius... View Obituary & Service Information

The family of Marcella DeJong created this Life Tributes page to make it easy to share your memories.

Marcella Lois DeJong was called to her heavenly home on Thursday,...

Send flowers to the DeJong family.