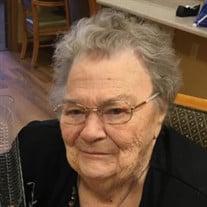 Not sure what to send?

LuVonne Priebe, 87, of Willmar, Minnesota passed away on Tuesday, May 3, 2022, at her home at Brookdale Assisted Living in Willmar. A Memorial Service will be held Saturday, June 11, 2022, at 11:00 AM at Immanuel Lutheran Church in Clara City with interment at the church cemetery. Visitation will be held one hour prior to the service. LuVonne Pearl Priebe was born on January 19, 1935, the daughter of John and Pearl (Erickson) Doose in Wood Lake, Minnesota. She was baptized at the Lutheran Church in Wood Lake and later confirmed at Trinity Lutheran in Boyd, Minnesota. LuVonne was united in marriage to Donald Priebe on December 27, 1953 also at Trinity Lutheran Church in Boyd. To this union there were three children born, Linda, Donita and Don. They lived in Sacred Heart before moving to the family farm near Clara City. Upon retiring they built a cabin on Big Chippewa Lake near Brandon, Minnesota. It was here that they built a beautiful home and hosted several gatherings with family and friends until Donald’s death in April 1987. LuVonne lived in several places before meeting Carroll Chapman and they lived together in Benson for 18 years until his passing. She eventually ended up living at Brookdale Assisted Living in Willmar. She loved everything about Brookdale and really considered it home. LuVonne enjoyed entertaining and cooking while living on the lake. At Brookdale she was known as their social butterfly. LuVonne wasn’t afraid to speak her mind and even suggested what they should have for a meal, most of the time it would include mashed potatoes, gravy and a creamed vegetable. She liked to help other residents get to where they were supposed to be. LuVonne is survived by her children, Linda (Steve) Person of New London, Don (significant other, Heather) Priebe of Janesville; grandchildren, Rochelle (Robert) Orsten of Willmar, Chris (Diana) Person of New London, Zach (Brittany) Person of New London, Heather Turek of Owatonna, Don (significant other, Stacy) Connor, Shari (Justin) Folsom of Mankato, Keegan (significant other, Savhannah) Priebe of Rochester; several great grandchildren; brother, Gordon (Cheryl) Doose of Alexandria; daughter-in-law, Missy Priebe of Waterville; brothers-in-law, Merle Hahn of Evansville, Virgil Anderson of Boyd; as well as many nieces, nephews, cousins, aunts and uncles. LuVonne was preceded in death by her parents, John and Pearl Doose; husband, Donald Priebe; daughter, Donita; sisters, Arlene Hahn, Violet Anderson, Shirley (Dick) Shogren; brothers, Chuck (Ruby) Doose, John Doose Jr.

LuVonne Priebe, 87, of Willmar, Minnesota passed away on Tuesday, May 3, 2022, at her home at Brookdale Assisted Living in Willmar. A Memorial Service will be held Saturday, June 11, 2022, at 11:00 AM at Immanuel Lutheran Church in Clara City... View Obituary & Service Information

The family of LuVonne Priebe created this Life Tributes page to make it easy to share your memories.

LuVonne Priebe, 87, of Willmar, Minnesota passed away on Tuesday,...