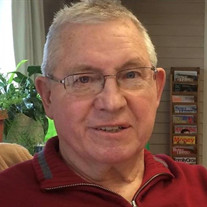 Luther Hoese, 79, of Granite Falls, died Thursday, February 13th at the Granite Falls Health Care Center. A memorial service will be held Saturday August 22nd at 11 am at the Granite Falls Lutheran Church. Visitation will be held one hour prior to services at the church on Saturday August 22nd. Luther George Hoese passed away at the Granite Falls Health Care Center the evening of February 13, 2020. His struggle with Parkinson’s disease ended peacefully with family by his side. Luther was born August 17, 1940 in Carver County, MN., one of five sons of Paul and Anita (Luedtke) Hoese. He grew up on the family farm near Mayer and was baptized and confirmed at Zion Lutheran Church in Mayer. He graduated in 1958 from Watertown High School. He was married to Dianne Molnau in 1960 and they were the parents of four children, Lisa, Brian, Eric and Nathan. Luther’s gift of conversation and wit led him to a career in sales. He sold AAL insurance, then went on to sell real estate. On June 4, 1994 he married Eyvonne (Hiepler) Marczak and became the step-father to her four children, Christine, Lester, Lisa and Joleen. Eyvonne and Luther lived in several communities during their 25 years of marriage, utilizing Luther’s real estate salesmanship to find homes to improve and sell. They owned the Sedan Hunting Club by Glenwood for a year, then moved to Lake Andrew by Alexandria and later to Lake Osakis. Luther became a driver for Rainbow Rider at Alexandria and Centra Care Nursing Home at Long Prairie. When Eyvonne retired in 2008 they moved to Granite Falls. As Luther’s mobility declined, he moved to the Minnesota Manor. He believed he was at a resort with the beautiful gardens and courtyards there. Six months later when the new Granite Falls Manor opened he became one of its first residents. He loved his new suite and coaxed Eyvonne to move there with him but she convinced him she didn‘t qualify yet. Luther was preceded in death by his parents Paul and Anita Hoese, son Brian and brother Mike, also a brother-in-law, Edwin Hiepler and sister-in-law, Anna Krugerud. Survivors include his wife Eyvonne, children Lisa (Rob) Ingvalson of Lakeville, Eric (Christine) of Maryland and Nathan (Jolene Overman) of Wisconsin; step-children Christine (Lee Kilpatrick) Hansen of Taunton, Lester (Kim) Marczak of Cottonwood, Lisa (Tony) LaMere of Harrisburg, SD and Joleen (Mike) Warwick of Granite Falls; 24 grandchildren and 3 great-granddaughters; his brothers Richard (LaVonne) of New Hope, Charles of St. Cloud and Ronald (Karen) of Mayer; a brother-in-law Earl (Geraldine) Hiepler of Willmar and two sisters-in-law, Leona Krugerud of Dawson and Deloris (Woody) Kojetin of Stillwater.

The family of Luther Hoese created this Life Tributes page to make it easy to share your memories.

Send flowers to the Hoese family.