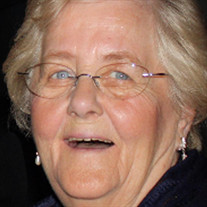 Lou Anne passed away on May 17, 2017 of a worn out, much used heart. Lou Anne Beito was born on August 14, 1939 in Granite Falls, Minnesota to Lloyd and Alta Halvorson Beito. She was the third of six kids and enjoyed growing up first on the Volstead farm and then the family farmstead and playing in Palmer Creek. She was baptized and confirmed at Saron Lutheran Church. She married the love of her life, Wayne Kling, on August 31, 1968. They raised seven children on their farm west of Granite Falls and taught their children the fine art of detassling corn, walking bean fields and pulling nails from boards. In the troubled farm times of the 1980’s, Lou Anne found her calling in life outside of being a mother. She stirred up things as an activist with the first act being a “plowdown” in 1980 to bring attention to the need for parity of farm prices. After unsuccessfully running for a MN House seat in 1982, she took a different political route and helped to develop the Minnesota Farm Advocate Program where she worked tirelessly for years helping family farms stay viable and in the hands of the families she helped. With the advocate program she traveled across the country conducting trainings and was honored with the Virginia McKnight Binder Award for Human Service in 1987 for her faithful advocacy work. In 1992 she became the state director of the MN Farmer’s Home Administration. In 1993 she was appointed by President Bill Clinton to go to Washington DC to serve as the USDA Deputy Administrator of Farm Loan Programs for the FmHA. From 1996 to 2000 she developed and implemented the Farm Service Agency’s Outreach Program. Lou Anne and Wayne returned to Granite Falls in 2000 and, without missing a beat, Lou Anne started helping farmers again. Lou Anne always had a strong opinion and was willing to fight for what she believed in. She spent thousands of dollars on phone bills and, if you called her home and got a busy signal, you knew she was likely in the middle of helping someone out. She enjoyed having her family for holidays and was a wonderful cook. During Christmas with the grandchildren, you would find “Grandma Louie” on the floor with them handing out the gifts and delighting in their joy. She was proud of being of Norwegian ancestry and she was happiest sitting at a table with family and friends having a cup of coffee and talking about life….and politics! Lou Anne is survived by her husband Wayne Kling of Granite Falls, MN and seven children; Carrie (Larry) Anderson of Westbrook, MN, Shari (Ron) Kottke of Walnut Grove, MN, Butch (Pam) Paskewitz of BeaverCreek, OH, Susan (Doug) Westbrook of Onalaska, WI, Michael (Tracey) Kling of Lewisville, TX, W. Mitchell (Carlee) Kling of Granite Falls, MN, and Matthew (Heather) Kling of Lonsdale, MN. She is also survived by 15 grandchildren, 8 great-grandchildren, brothers Ronnie (Deanne) Beito, David (Lorelei) Beito, Gary Beito and Paul Beito and sister-in-law Pat (Jerry) Stone. She was preceded in death by her mother and father, mother and father-in-law Delilah and Henry Kling, and sibling/in-laws Donna and Billy Bruflat, Barb and Percy Falk and Judy Beito.

Lou Anne passed away on May 17, 2017 of a worn out, much used heart. Lou Anne Beito was born on August 14, 1939 in Granite Falls, Minnesota to Lloyd and Alta Halvorson Beito. She was the third of six kids and enjoyed growing up first on the... View Obituary & Service Information

The family of Lou Anne Kling created this Life Tributes page to make it easy to share your memories.

Send flowers to the Kling family.