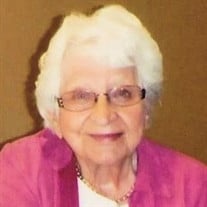 Lorrayne Johnson, 90, of Montevideo, passed away on Tuesday, July 23rd at the Meadow Creek in Montevideo. Funeral services will be held on Saturday, July 27th at 1:00 pm at Salem Lutheran Church. Burial will be held at Faith Lutheran Cemetery in Madison. Visitation will be held one hour prior to services at the church on Saturday. Lorrayne Mildred Johnson was born on November 3, 1928, the daughter of John & Caroline Boehnke in Madison. She was baptized and confirmed in the Lutheran faith. She graduated from the Bellingham High School in 1946. She was united in marriage to A. Milton Johnson on September 5, 1948, at Trinity Lutheran Church in Bellingham. They farmed in the Bellingham area and then owned a gas station in Watertown, South Dakota. They moved to Minnesota where they owned a grocery store in Clarkfield. In 1959 they moved to Montevideo, where Lorrayne worked in various retail stores. She was a member of the American Legion Auxiliary, Job’s Daughters and Salem Lutheran Church. Lorrayne and Milton loved to travel, visiting China, New Zealand, Norway and Germany. They spent several winters at Victoria Palms in Donna, Texas. She enjoyed bowling and selling poppies, but her true passion was her grandchildren. Lorrayne passed away on Tuesday, July 23, 2019, at Meadow Creek. She was 90 years of age. She is survived by her children: Richard (MaryLou) Johnson of Brighton, Colorado; Terry (Susan Thomas) of New Brighton and Janelle (Dan) Joneson of Spicer; six grandsons: Ryan (Lindsy) Johnson of Erie, Colorado; Blayne (Diane) Johnson of Denver, Colorado; Nick Johnson of Fridley; Tom (Angela Kahn) of St. Paul; Andy (Angie) Joneson of Duluth and Aaran (Mindy) Joneson of Willmar, Minnesota; four great grandchildren: Clara, Nelly, Trace Johnson and Kim-Xuyen Joneson; and extended family and friends. She was preceded in death by her parents, husband, sister Delores and an infant grandson

Lorrayne Johnson, 90, of Montevideo, passed away on Tuesday, July 23rd at the Meadow Creek in Montevideo. Funeral services will be held on Saturday, July 27th at 1:00 pm at Salem Lutheran Church. Burial will be held at Faith Lutheran Cemetery... View Obituary & Service Information

The family of Lorrayne Johnson created this Life Tributes page to make it easy to share your memories.

Lorrayne Johnson, 90, of Montevideo, passed away on Tuesday,...