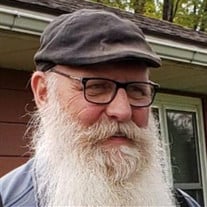 Loren Fokken, 68, of Clara City, passed away on Monday, March 8th at his residence. Memorial services will be held on Saturday, March 13th at 2 pm at Bunde Christian Reformed Church. Visitation will be held Friday evening from 5 to 7 pm at the Bunde Christian Reformed Church and continue one hour prior to services at the church on Saturday. The service may be viewed at https://youtube.com/watch?v=Q2VpGmq2YNM Loren Burton Fokken was born on June 7, 1952, to Egbert and June (Albrecht) Fokken in Montevideo Hospital, Montevideo, Minnesota. He was baptized at Bunde Christian Reformed Church of rural Clara City and attended that church throughout his life. He attended Clara City Public School and graduated with the Class of 1970. After high school graduation, he pursued a degree as an electrician at Granite Falls and Hibbing vocational colleges. He worked for Freetly Electric in Kerkhoven for about seven years. At that time, he moved back to Bunde to help his father farm while continuing his electrical work on his own and working part-time for Wearda Implement in Clara City. When Loren had his first heart attack in 1988 and was no longer able to farm, he worked at Wearda Implement full-time. Loren became involved in the Boy Scout program in 1982. He served as Cubmaster for about nine years, assistant Scoutmaster for one year, and Scoutmaster of Troop 269 for 25 years, and was still involved with the Scouting program until his death. It was a treasured part of his life. Loren also enjoyed riding motorcycle, either by himself or with his friends. He rode across Minnesota and much of the United States on a Honda Gold Wing, but the last years was on his Victory. He was able to spend a couple of winters in Texas and enjoyed his rides in the hill country. Loren also enjoyed participating in plays in Renville with Friends of the Arts. Even with his declining health, Loren kept a positive attitude and brought joy to so many. Loren is survived by his brother and two sisters: Jim (Barb) Fokken of Hibbing, Karen Nieuwbeerta of Alexandria, and Edith (Gene) Tensen of Sunburg; he is also survived by seven nieces and nephews: Shawn (Mrs. Gregg) Fokken of Oronoco, Nancy (Tim) Strom of Hibbing, Jennifer (Jim) Barnes of Queen Creek, AZ; Julie Ostendorf (Dan Amor) of Carlos, Jeff (Wendy) Nieuwbeerta of Alexandria, Jill (Jamey) Thompson of Montevideo; Daniel Tensen of Sunburg, and Aaron (Sara) Tensen of Spicer; Loren is also survived by his “Little Brother” Jeff (Marilyn) Treml of Grand Prairie, TX, along with extended family, many friends and Boy Scouts. He was preceded in death by his parents, Egbert in 1981 and June in 2012, nephew Gregg Fokken in 2002, and brother-in-law Harlan Nieuwbeerta in 2004. Blessed be his memory.

Loren Fokken, 68, of Clara City, passed away on Monday, March 8th at his residence. Memorial services will be held on Saturday, March 13th at 2 pm at Bunde Christian Reformed Church. Visitation will be held Friday evening from 5 to 7 pm at... View Obituary & Service Information

The family of Loren Fokken created this Life Tributes page to make it easy to share your memories.

Loren Fokken, 68, of Clara City, passed away on Monday, March...

Send flowers to the Fokken family.